Along Came John is the musical child of “Green Onions,” plus horns. 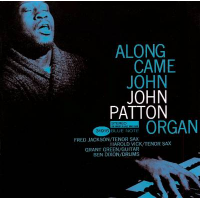 If you like Booker T and MG's, you'll love Big John Patton's Along Came John. It is, without a doubt, the funkiest, bluesiest, most soulful organ jazz record of all time, bar none. And that includes everything ever done by the legendary Jimmy Smith.

Along Came John is a great party record, and once you hear it, you'll be moving your feet and feeling the groove.

This is blues, pure and simple—and I do mean simple. There are six songs and every one of them uses the same three-chord template. Yep, it's a formula, but it works. Like lots of great rock records—think "Louie Louie" or almost anything by Chuck Berry—there are infinite variations on the three-chord blues.

The band is equally simple: Patton on organ, Grant Green on guitar, Ben Dixon Quintet on drums and two tenor saxophones—Fred Jackson and Harold Vick. (I can't tell them apart, and there's no need to. Both are wailing wonders.)

Let's put this in perspective. Along Came John was recorded in April 1963. Just five months earlier, Booker T and the MGs released "Green Onions," one of the greatest and most popular R&B instrumental hits ever. It featured a ridiculously catchy hook, yet another variation on a three-chord blues, by one of the all-time great organ-guitar combos. Along Came John is the musical child of "Green Onions," plus horns.

There's nothing complex or sophisticated here. No amazing techniques or unusual rhythms. If cerebral jazz is your thing, look elsewhere. But if you like your jazz fun and funky, get this record. It's a classic of the genre.