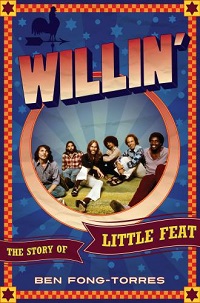 Musically speaking, Southern California in the late-1960s, early- 1970s was the musical post-hippie equivalent of impressionist Paris in the late nineteenth century. So dense was the musical talent in the Los Angeles area, that reading any history of it would have you believe there was a Frank Zappa or the Eagles on every corner across the San Fernando Valley. But the scene was way bigger than that. For every Linda Ronstadt and Jackson Browne carving their piece of big label pie, there were dozens more supporting them, living with less temporal if not financial success.

One such band was Little Feat, that eclectic Los Angeles band who wowed the critics but not the masses,composed songs others made famous and, regrettably, are known to most for a single song, "Dixie Chicken." Composer George Frederick Handel was the toast of London in the Age of Enlightenment, author of many compositions only to be remembered for one, Messiah. I suspect that he and the band could commiserate. While celebrity might be fleeting, sublimity is forever.

By Time Loves A Hero, George, through his mercurial nature, impressive drug use and interest in production, tacitly ceded his creative control of the band to keyboardist Bill Payne and guitarist Paul Barrere. But before relinquishing all control, George suggested that the band record several concerts in the Feat-friendly confines of London's Rainbow Theater and George Washington University's Lisner Auditorium in August 1977. Seven shows were recorded and the resulting Waiting For Columbus, produced by George, was released in March 1978. It became the band's biggest selling album and is largely considered the finest live recording of the "classic" rock era.

After Waiting For Columbus, George split his time between the bands next recording, Down On The Farm (Warner Brothers, 1979) and his own beleaguered solo project, Thanks, I'll Eat It Here (Warner Brothers, 1979). George died of heart failure June 15, 1979 Arlington, Virginia, while promoting his solo recording. Down On The Farm was completed and released posthumously. Little Feat entered a near decade fallow period where all the members joined other concerns before reuniting in 1987 and releasing Let It Roll (Warner Brothers, 1988). They have recorded and toured as a band to the present.

Those are the bare facts. For the sand between the bricks, Rolling Stone co-founding editor Ben Fong-Torres has penned a reader friendly account of Little Feat from its beginnings with George and his band, The Factory, to the present day. Fong-Torres is the appropriate writer as he was present, in his capacity at Rolling Stone, through the Lowell George era of the band. His chapter divisions are based on the albums released, with the opening chapters anchored to George's associations with the Factory, the Fraternity of Man and the Mothers of Invention.

Detailed in taut style was how the classic sextet formed to record Dixie Chicken. Fong-Torres notes a myriad of associations George and band members had with a who's who of Southern California music and beyond through production duties, session work and just hanging out. Jackson Browne, the Eagles, the Doobie Brothers, Three Dog Night, Linda Ronstadt were all part of the Little Feat picture. Fong-Torres paints an even-handed picture of George and the band as they change music in the 1970s. There are no grizzly stories of drug use or road tales, only the simple statements of what was what. George's addictive behavior and its effect on those around him is only described in the abstract, leaving the reader to infer the arc of this familiar narrative.

The last third of the book is devoted to the band after their reformation in 1988: the Craig Fuller period, the Shaun Murphy period, the death of original drummer Richie Hayward with drumming duties going to Gabe Ford and the final set up. Gratefully, Fong-Torres focuses on band member Fred Tackett, a Little Rock, Arkansas native who was on the Feat scene from the very beginnings, contributing songwriting to Dixie Chicken ("Fool Yourself"), Thanks, I'll Eat It Here ("Honest Man" and "Find a River") and Down On The Farm ("Be One Now"). Tackett remains a band member since 1988 and a full-fledged songwriter for the band, in addition to being a go-to studio hand for the last 40 years. He warrants his own book. Willin': The Story of Little Feat is a love letter to the technical and temporal value of music made during a golden time. While admired by many, Little Feat never achieved the warranted respect. Fong-Torres' book goes a long way to correct that.