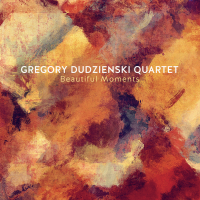 There are many Beautiful Moments on Chicago-based tenor saxophonist Gregory Dudzienski's second CD under his name, some of which enfold his warm-blooded tenor, others the spirited give-and-take with his blue-chip quartet whose other members are pianist Chris White, bassist Kelly Sill and drummer Jeff Stitely. Yes, Dudzienski is heavily influenced by the music of the 1950s and '60s, but some would argue that was a Golden Age for small-group jazz, with many of its renowned standard-bearers now enshrined in various jazz Halls of Fame. Dudzienski, who wrote all seven of the album's numbers, pays tribute to two of those masters—Dexter Gordon and John Coltrane—on "Dexter's Laboratory" and "The Father," and to a number of others on "Meeting Your Heroes."

"Dexter" and "Father" lead off the session, followed by the Brazilian-infused "Tom-ish," written with Antonio Carlos Jobim in mind but later, at Sills' suggestion, co-dedicated to trumpeter Tom Harrell. "Meeting Your Heroes"—ushered in by Stitely's fiery tom-toms—is next, with the enchanting title song, based on the standard "You're a Weaver of Dreams," sandwiched between the melodious "Yellow Alley" and well-grooved "See, I Told You." The Gordon influence is clear on "Dexter," while Trane is similarly endorsed on "The Father," as are Joe Henderson and one of Dudzienski's mentors, Jerry Bergonzi. Sill takes the opening solo on "Yellow Alley," followed by White and Dudzienski; Sill and Stitely are given free rein on "See, I Told You," and make the most of it.

Even so, the free and easy "Beautiful Moments" earns top honors in this admirable parade, owing to its charming melody and ardent solos by all hands. And given the album's rationale, that is as it should be. For someone so talented, Dudzienski hasn't recorded often; let us hope that Beautiful Moments helps reverse that arc.