Will Mason Ensemble: Beams of the Huge Night

By Karl Ackermann
December 6, 2015
Sign in to view read count 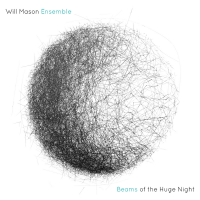 New York City resident Will Mason, while pursuing a Ph.D. in music at Columbia University, took the time to submerge himself in the most Spartan and remote conditions of his native Maine for the inspirations of nature that become manifest in Beams of the Huge Night. The drummer and composer assembled an unusually populated septet to give life to a generous sixty-six minutes of sound and music, capturing the volatility and tranquility of true seclusion.

Mason, who also fronts a noise-metal band, has an acute talent for composing very complex, extended pieces, creating an absorbing synthesis of jazz, technology, classicalism and an organic construction that includes any or all of those components. The ensemble includes oboist Stuart Breczinski who fits in well with the idiosyncratic program despite playing an instrument that rarely appears in jazz. Nina Moffitt supplies mostly wordless vocals that often simulate the effect of an additional woodwind instrument. Moffitt has recorded with her own quintet lending her unique vocalizations to a diverse range of compositions from Ravi Coltrane to Billy Strayhorn.

The other reed instrument on hand is Danny Fisher-Lochhead's alto saxophone. A multi-instrumentalist having also recorded a solo Wurlitzer album Piano Songs (Fishkill Records, 2015), Lochhead is particularly at home with the type of material on Beams of the Huge Night. His own namesake large ensemble outing, the engrossing Tools Of The Abstract (Fishkill Records, 2015), while more directly jazz oriented, features similar components of complex multi-layered improvisation in the extended format.

The string contingent consist of two guitarists, Travis Reuter and Andrew Smiley, and bassist Dan Stein. Reuter leads his own quintet and has a long-term performance commitment with Arturo O'Farrill's sextet. Smiley has recorded two albums as part of the eclectic quartet Little Women, a group that includes alto saxophonist Darius Jones. Stein (another multi-instrumentalist) has played in trumpeter Kenny Rampton's ensemble along with saxophonist Donny McCaslin. Stein has also performed at Jazz at Lincoln Center and as part of the Juilliard Jazz Ensembles tour.

Beams of the Huge Night opens with the sixteen-plus minute "Finn" and the composition serves as the showpiece of the album, bringing together Mason's ideas on the conflicting characteristics of untainted nature. Slowly washing in and patiently building on drums, reeds and voice, the full ensemble soon becomes apparent as the tone shifts to a frenetic pace. Mason, Reuter and Smiley imperceptibly move to a rock rhythm that the reeds seem to resist before falling into lockstep, then breaking out in free style. By the half-way point, another shift has taken place; one that conveys the dark trepidation of being lost deep in the night wood. Passages vanish without a trace as "Finn" goes through more stylistic fluctuations as it progresses.

"Door 6" has a rock drive to it but with Moffitt's ethereal prescience floating above the surface, it's never predictable as to where the piece will settle. In contrast, "Door 7" has a decidedly more delicate quality before the pace ratchets up near the conclusion. "Dixfield, ME.," another extended piece at almost sixteen minutes, opens in a lyrical, almost fragile manner then shatters in a high-energy improvisation dominated by Fisher-Lochhead, Reuter and Smiley. It is again Moffitt's voice that seems to bring free-for-all back to a centered place only to lose it to a tense, spikey configuration of guitars and saxophone. Named for a small town in northern Maine "Strong, ME." is a dream-like melody where the contrasting guitar harmonies add a disconcerting instability to the atmosphere.

Another long composition, "Brille," concludes Beams of the Huge Night. Mason's booming drums and Stein's deep bass belie the coming free improvisation that overtakes the piece. But like all the compositions on the album, everything changes and we find ourselves in a tranquil, pastoral setting at about six minutes in. The piece closes with mix of regality and rebellion, all somehow staying on point.

Beams of the Huge Night is a sprawling, ambitious project and Mason has a unique musical vision in the midst of a highly intricate creative process. He successfully seizes on the ambiances of positive and negative natural environments and conveys them with help of this empathetic and very talented group of musicians. This is an unusual album; one where it would be as easy to become as lost as it would be in the woods of northern Maine were it not for an expert guide like Mason.