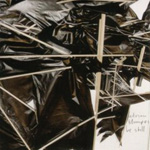 Adrian Klumpes is the keyboard player of the Sydney-based trio Triosk, which recently released The Headlight Serenade, but on this debut solo album he presents a very different face to the one he displayed in the trio. Recorded in one five-hour session in Klumpes' native Sydney, Be Still is perfectly—but ambiguously—titled.

At times the music is completely minimalist in its sense of unchanging stillness; this is never truer than on the title track, in which carefully placed notes convey an air of calm reflection, and the spaces are as important as the notes themselves. In similar vein is "Unrest, the album's longest track (at nearly ten minutes) and centerpiece; its multiple layers of keyboards combine to produce a shimmering kaleidoscopic quality reminiscent of early Terry Riley.

At other times the mood is far less tranquil or meditative. There can be a chilling unease to the music, making one think that Klumpes has potential as a composer of soundtracks, maybe for chillers or thrillers. Witness "Alone (another fitting title), with its brooding sustained bass notes allied to a chilly, disembodied melody line: it would not be out of place on the soundtrack of Halloween. Just as unnerving is the two minute-long "Why —devoid of melody but consisting of atmospheric drones overlaid by occasional noises—that steadily builds to a crescendo.

Taken as a whole, Be Still is a highly inventive and varied album without a weak track—and a fine debut that is sure to stand the test of time.

Cornered; Weave In and Out; Be Still; Alone; Unrest; Why; Exhale; Give In; Passing Pain.