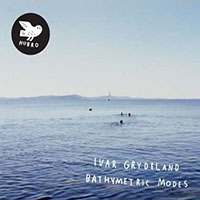 A member of drone-improv band Huntsville and the more abstruse Dans les arbres who has given Ballrogg a facelift with Cabin Music (Hubro, 2012), Norwegian guitarist Ivar Grydeland has built a busy career as a performer and as co-head of the extremely left-of-center SOFA Music. In most live contexts, like his 2007 Punkt Festival appearances with Huntsville and Dans les arbres—and whether acoustic or electric, effected or not—Grydeland has always positioned himself on the outré side of things, often being nearly indiscernible as a guitarist, so unorthodox is his overall technique. Melodies seem to be of less concern to Grydeland than texture, which makes Bathymetric Modes all the more surprising, enjoyable and welcome.

If there's any precedent for this engaging, largely solo record of Grydeland compositions, it's guitarist Bill Frisell in the early 1990s and albums like Where in the World? (Elektra/Nonesuch, 1991), when he was making music that, despite bearing some allegiance to the roots music that would take increasing precedence in the ensuing years, was still somehow more oblique, more skewed, more idiosyncratic. Clocking in at just over 33 minutes, Bathymetric Modes is the most unabashedly melodic recording Grydeland has made, at least in recent times, but takes lessons learned from all his other activities and consolidates them into a concise package that, while still somehow distanced from orthodoxy, remains a most eminently accessible album of roots-centric but not still not roots music.

Improvisation is clearly a part of the overall picture here, but so too—and, perhaps, more so (or at least more obviously) than any of his other projects—is structure. "Bounce Back," with its gentle, programmed underwash, leaves Grydeland space to extrapolate on instruments like acoustic guitar, ukelele and zither. The orient-tinged "Ping Back" begins as one of Grydeland's most flat-out beautiful pieces ever, while remaining somehow static, leading to "Bounce," the album's longest track at just over nine minutes. It's also the most abstract and ethereal piece on Bathymetric Modes and yet, as a Gamelan-like pattern emerges, so too does a strong melody, doubled by Grydeland's Dan les arbres partner, clarinetist Xavier Charles.

While Eivind Aarset and, more recently, Stian Westerhus have been garnering most of the international attention (and well-deserved it is), guitarists like Ivar Grydeland shouldn't be left out of this elite group of futuristic six-stringers. With the weirdly wonderful Bathymetric Modes, Grydeland has delivered an album that, in its combination of lyrical beauty, attractive sound worlds and left-of-center concerns, deserves to place him on the same international radar alongside his better-known Norwegian colleagues.

Roll Back; Roll; Bounce Back; Ping Back; Bounce; Ping.