By Greg Simmons
January 3, 2013
Sign in to view read count 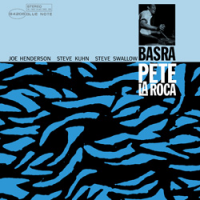 Pete La Roca was one of those musicians with a long but under-sung career. He was a sideman to some great Blue Note leaders including saxophonists Sonny Rollins, Jackie McLean, and Joe Henderson, but he only ever recorded one date (1965's Basra) under his own name during the label's heyday, and indeed only three records total as a leader over a fifty-year career. He was a drummer in the background in almost every sense.

According to La Roca's obituary in the New York Times (he died November 19th, 2012), he left performing to go to law school and then to work as a contract lawyer, mostly because he couldn't make a living playing the music he wanted to play.

Practicing law certainly came in handy when he sued for royalties related to his later album, Turkish Women at The Bath (Douglas, 1967); La Roca only returned to performing when he was able to balance his own financial stability with performing music. His life should serve as a reminder of how difficult it can be to actually make a living as a jazz musician.

La Roca really made that one Blue Note album count. Basra features the great Joe Henderson on tenor saxophone, as well as pianist Steve Kuhn and bassist Steve Swallow—an A-list band if ever there was one. It's a dark record, almost dirge-like in places ("Lazy Afternoon") but the playing is so solid. It's truly a shame this band wasn't recorded more than once.

The title track opens with a plaintive bass line with a Middle-Eastern groove, picked up by Henderson stating the keening melody. Kuhn drops arpeggiated chords in the background as comps, creating an almost harp-like effect. La Roca's drumming is simply structured, crashing out on the symbols and toms at a stately pace. His solo doesn't add much more than the odd press roll and some additional snare fills; it might be among the most restrained, measured drum solos of all time. Kuhn intersperses his solo among the drums and doesn't add much more than he's already offering through his comping. It's trippy, deeply grooving and exotic, and it closes the way it starts, with the bass up front. There are six songs on this record, but the title track is the one to hear, as it truly anchors the record.

Again exhibiting his willingness to dig deep into the Blue Note vaults, Ron Rambach at Music Matters has remastered Basra from the original two-track tapes and pressed it onto two 45RPM vinyl records. Like everything else in the series the sound quality is exceptional and really does justice to this unique and underappreciated music. La Roca wasn't a household name, but he was a musician with a very personal vision of jazz that is worth (re)discovering.