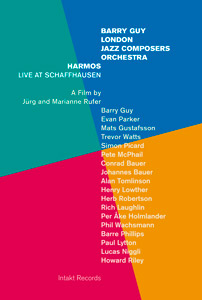 For those who thought they had missed their chance to see one of the most impressive agglomerations of talent in European improvisation, the 2008 appearance of the London Jazz Composers Orchestra in Switzerland was manna from heaven. Having last played in Berlin a decade previously, it seemed the opportunity had well and truly passed, with the challenging economics and the practical difficulties inherent in keeping a 18 strong orchestra in good working order overwhelming. However, following a commission by the Schaffhauser Jazz Festival of a new piece-"Radio Rondo," (documented on the CD of the same name (Intakt, 2010))-leader and composer, bassist Barry Guy once more assembled his crew, with a few fresh faces, American as well as European. Thanks to the efforts of producer Jürg and Marianne Rufer, the latest incarnation of the band can now be seen, as well as heard, far more widely.

"Harmos" can almost be considered one of the LJCO's greatest hits. Composed in 1987, it was first chronicled on Harmos (Intakt, 1989), has also appeared in a trio version with pianist Marilyn Crispell on Odyssey (Intakt, 2002), and was the last chart performed by the LJCO prior to its Swiss reunion. In common with all the Englishman's works for the LJCO, it seeks novel resolutions to the conundrum of how to allow improvisation and composition to coexist. But the secret to its enduring popularity may lie in Guy's statement that "the essential idea behind "Harmos" was to create a piece of music based upon melodies." In that he succeeds, the glorious anthemic upwelling early on over which alto saxophonist Trevor Watts soars in impassioned ecstasy is one of the highlights. But there are many others, not least the opening trombone duet between the ebullient Alan Tomlinson and the not easily overshadowed Johannes Bauer.

Guy, a master of dynamics in both conducting and playing bass, draws from both ends of the sonic spectrum, from the wispiest of tuba susurrations by Per Ake Holmlander to full force orchestral might. But from flat out the band morphs into a lilting goodtime swing, underpinned by Howard Riley's angular piano comping and Pete McPhail's sweetly wiry alto saxophone. The temperature inexorably rises to a climax whereupon it cuts to leave Evan Parker's serpentine soprano saxophone over a knotty horn riff. This in turn becomes a feature for the celebrated Parker/Guy/Lytton trio, until it is gradually enveloped by a return of the grand anthem.

Five cameras are discreetly deployed to capture proceedings, making visible the interactions and mechanics of the piece. However the number of options in terms of viewpoints and personnel often results in the focus cutting away from the main action to switch around the various sections of the orchestra. So for example, Watts incantatory alto excursion is heard but only periodically glimpsed, and the same is true elsewhere when prolonged attention would serve the narrative of the music better. However that is a relatively minor gripe which hardly detracts from a monumental performance which bears both repeated watching and listening.