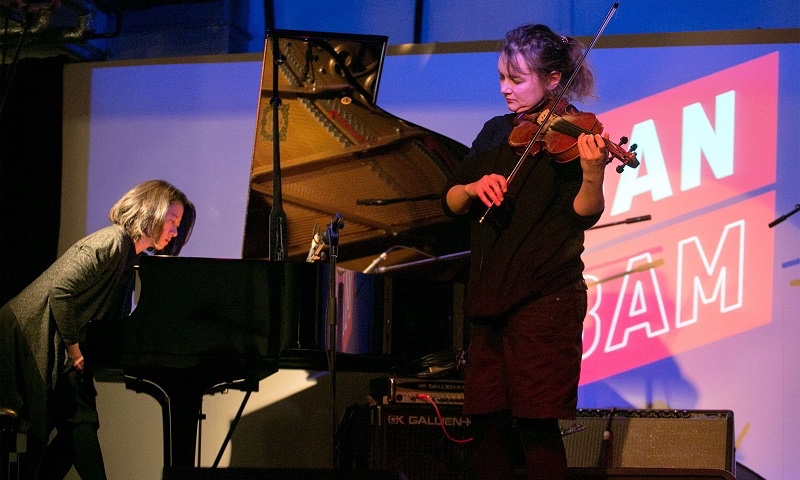 Only by showing that anything can be done by either a man or a woman can you really change the perception —Rosella Bottone, musician, sound engineer, founder of Girls Rock Dublin

Regular goers to jazz/improvised music gigs and festivals might have clocked the fact that those on stage tend to be predominantly male—a mirror, more often than not, of the make-up of the audience. Women instrumentalists are the exception rather than the norm. Though what exactly, we should perhaps ask ourselves when it comes to music and gender, is normal?

This, and many other questions related to the gender imbalance in jazz/improvised music, are put under the microscope at BAN BAM, a vibrant one-day festival of talks and music [for music review see separate article] by Improvised Music Company—the people who brought you the award-winning festival 12 Points and Down with Jazz.

BAN BAM signals an important new initiative from IMC, as the festival's Creative Producer and IMC Marketing Manager Aoife Concannon explains: "I'd become aware of the gender imbalance on stage in the last few years and we at IMC decided to take a bit of action. The first thing was to talk to the female jazz musicians in our local scene to get a feel for their perspective about their experiences, why they think there are so few girls and women pursuing careers in this sort of music and what they think could help them in their careers."

BAN BAM is a play on 'bean'—the Irish for 'woman.' It's certainly catchier than the usual 'Woman in Jazz' titles that often accompany similar events. "We want it to be a fun event, not something that sounded weighty, academic and restricting," says Concannon. Going forward the name is also more user-friendly. "If we want to do collaborations with other genres, whether it's rock, pop or whatever, then BAN Bam could still be used."

From the outset, the IMC team of Concannon, Kenneth Killeen and board member Riona Sally Hartman concurred that just putting on music for BAN BAM was not enough. "We decided that a big part of this festival would have to be conversations. Conversations on the issues around gender imbalance in jazz and improvised music is what it's all about."

What's Wrong With This Picture?

To set the scene, the first panel discussion is preceded by a slide presentation from Issie Barratt (jazz musician, composer, conductor and educator) that provides snapshots of her thirty-year career to date. In all the ensembles she has been involved in, whether performing, writing or conducting, there is a striking common denominator: "The only woman I've actually seen in any of that, in any capacity, was me," she states. As Head of Jazz at Trinity Laban and the National Youth Jazz Collective, Barratt also observed that the majority of students were also male. "It starts to make you think. What's going on here then?"

A multi-faceted artist, Barratt has also worked extensively in the domain of classical music, where a different picture emerges: "I notice that when I write for contemporary classical ensembles that the gender balance is much more fifty-fifty and I started to think why is that?"

Barratt's research in the UK turned up some stark figures, namely that women make up only 5% of jazz instrumentalists and that less than 5% of bands programmed at UK jazz festivals are led by a woman. She found a similar picture in education, where women make up a tiny percentage of professors in the UK's conservatoires and music colleges. Women instrumentalists are also poorly represented in the jazz media and, when all the above facts are taken together it's not a total surprise that women are heavily outnumbered by men on the shortlists for jazz awards.

A disproportionate number of women, Barret observes, lead their own ensembles: "They say it's often because they are not asked to be in other people's projects. Rhythm section players in particular say it's really difficult to get the same opportunities to be a side person as a woman."

Clearly perceptions surrounding females and music in general---and what Barratt refers to as unconscious bias in the industry—need to be better understood. There's plenty of food for thought in Barratt's presentation (a longer interview with Barratt pursuing these issues will appear presently at All About Jazz), which the opening panel wastes no time getting its teeth into.

What sort of changes, Hartman asked, can be made to improve the gender balance in jazz, and indeed across all music genres? For Barratt, the way the music is taught could be significantly refined to foster greater gender balance. "It is definitely the pedagogy; you have to take away the Alphaness out of it and make it a much more relaxed environment. That Alpha culture is a turn-off for creativity."

A subject that arose repeatedly on the panel is the importance of female role models. In Dublin, in the summer of 2016, Bottone helped launch the summer school Girls Rock, Dublin, part of a global movement that operates in over a hundred cities. At these week-long camps girls and young women can study vocals, guitar, bass, synthesizer and drums. They form bands, write songs and at the end of a week play a gig. What's amazing about these camps is that no previous musical experience is necessary. "It's kind of crazy and that's why it's exciting," says Bottone.

"Only by showing that anything can be done by either a man or a woman can you really change the perception. If you've never seen a sound engineer who is a woman you will maybe never think 'Oh, maybe I will go and study that.' That's why we do it."

Girls Rock Dublin has already born fruit, with some of the girls since starting their own bands. One has gone to the music college BIMM to study music while another, Rosella relates, has gone on to Sound Training College. The relaxed environment that Barratt mentioned as being essential is clearly a factor in the success of Girls Rock camps. "The discomfort of being outnumbered, like in most summer camps wasn't there," says Bottone. "It was a safe space starting from a completely different level."

In his role as a music teacher at Headford Music Works in Galway, Matthew Berrill leads the Youth Jazz Ensemble, which as could be seen at the Galway Jazz Festival 2016 has a healthy gender balance. In recent years the jazz ensemble has had two female drummers as well as female trombonist and trumpeters, though Berrill admits that this has not been by conscious design. "It's easy to have that safe space in a second level institution like a secondary school because they haven't chosen to be there—they're there already. It's very easy to be relaxed in that environment and do whatever."

The issue of gender imbalance raises its head above the parapet for all to see when it comes time for students to make a decision about third level (university, college) study. "I see that a lot of the girls have gone on to do classical music or have gone into teacher training," says Berrill. "Very few have gone on into improvised music or jazz per se. It's a challenge to encourage that as just as viable an option as going for your classical degree or teacher-training."

Hartman and IMC have carried out research in Ireland on this issue. They found that at Leaving Cert (the final school examination for students aged 18) 70% of music students are female but that in third level jazz courses females make up only 8% of students. The security of a state-funded teaching job or a career in classical music appear to be the preferred options. "There's not the security in being a freelance musician," says Berrill, and maybe it's easier for a male to make that decision, although it's hard regardless of gender."

Barratt has long liaised with jazz festivals, asking them to do more to champion women in their programmes. The festivals are, she says, in close contact with the conservatories, and keep an eye on female musicians in the hope that they'll be ready for such a public stage whenever their projects are fully developed. As often as not, however, the female students drop out, or on graduating then give up the notion of pursuing a career in jazz. It's a frustration for Barratt: "Why not take risks? Why not throw caution to the wind?"

The answer to that may lie partly in the lack of opportunities presented to women while they are studying. Hartman makes the point that young men habitually ask each other to play in their respective bands but that women are more often than not ignored. Discouraged, they drop out. Why this bias against female jazz/improvising musicians? The panel members agree that the bias at work is unconscious.

Hartman relates anecdotally how a lot of female jazz musicians in Dublin make the same observation that whenever they go to jam sessions or gigs in order to network the conversations about music that the guys are having change as soon as they arrive. Barratt gives the example of the jam session culture at Ronnie Scotts in London, where female jazz musicians who have been there from early in the evening don't get called up to jam whereas guys who arrive much later are called up within half an hour of arriving. "The next day they'll get 'Oh we're sorry we didn't call you up it was so busy.'"

The struggle to get gigs and exposure means that female role models in jazz are relatively small in number compared to male role models. As Hartman explains, however, not all female musicians are comfortable with the notion of being held up as a role model. "Women are already the 'other' in the room if you're in a jazz ensemble and they're often very reticent if you then want to put them on a pedestal."

When considering the line-up for BAN BAM Hartman encountered reluctance on the part of some female musicians to be associated with a festival about women in jazz. "They'd say 'It's hard enough to get a gig, people don't want to think you're a nag as well,' or words to that effect." Some of them, Hartman adds, were resistant to the idea of an all-female line-up, which they thought could be seen as tokenistic or gimmicky. Hartman's take on that position is thought-provoking: "I know lots of all-male line-ups who are really excellent and it never occurred to me that it's a gimmick."