By JAKOB BAEKGAARD
December 5, 2009
Sign in to view read count 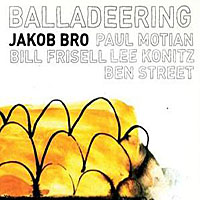 Throughout the process of recording Balladeering, Danish guitarist Jakob Bro was followed closely by filmmaker Sune Blicher, who documented the sessions, which took place at the famous Avatar studios in New York, capturing the poetry of the music in pregnant images. A recurrent motif in the movie is musicians engrossed in listening, and this particular framing also finds its way into the photos by Robert Lewis that grace the album, becoming a metaphor for the music itself and the spirit of creation.

More than anything, Bro could be termed "a listening musician." He creates his poetic compositions as open structures that invite interpretation. It is Bro's special gift that he is able to make music both melodically enchanting and not locked in predefined patterns.

The opener, "Weightless," is an example of how a simple melodic guitar figure is expanded and transcended into a translucent texture of sounds, with drummer Paul Motian's feathery touch working around the complex tapestry of guitar lines created by Bro and fellow guitarist Bill Frisell.

On "Evening Song," legendary saxophonist Lee Konitz joins the quartet and plays with a tone that seems to embody the beauty and pain of a lifetime, while "Terrace Place," with its mild dissonance and melancholy mood, finds the musicians speaking in a unified language where the guitarists' bended strings and loops are complemented by Konitz's circular blowing and Ben Street's elegant, almost invisible, bass patterns.

ADVERTISEMENT
Balladeering is a true artwork, which brings out the best in the Participants; Konitz has not played better in some time. The album, however, is not about individual brilliance, but rather a proof of jazz as a listening art form that invites the unexpected and transcends egos. Such beauty is only possible if the compositions do not limit the potential of the music. Here, all possibilities are kept open and the result is a music that is infinitely rich in its democratic beauty.

A note: Balladeering is available both as a single CD release and as a deluxe box, which features the album in both CD and vinyl versions and adds Blicher's fascinating documentary about the making of the album, Weightless: A Recording Session with Jakob Bro.