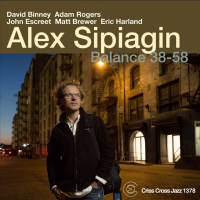 Jazz fans who have followed trumpeter Alex Sipiagin's career thus far will have noticed that he likes to approach his original (and highly unique) music differently on each new album he presents. His 2013 release on the distinguished Criss Cross label, Overlooking Moments, presented his music in a stripped-down, chord-less quartet setting and focused on the dynamic interplay between Sipiagin, tenor-giant Chris Potter, and the formidable rhythm section of Scott Colley and Eric Harland. In contrast, his excellent 2011 sextet release, Destinations Unknown favored a more maximalist approach to Sipiagin's heady, intricate compositions and extempore improvisation.

This year's Sipiagin release, "Balance 38-58" returns to the sextet setting for music that is bold and new, but also recognizable as Sipiagin's own. Returning to the fold are maverick alto player David Binney, guitarist Adam Rogers, and drummer Eric Harland, each familiar collaborators on previous Sipiagin albums. New to Sipiagin's music (but familiar to followers of the Criss Cross label) are pianist John Escreet and bassist Matt Brewer.

"38-58" kicks off the album with a complex, electric bass-driven groove that leads into Sipiagin's signature polyphonic melodic style. Sipiagin's trumpet takes the lead with Binney and Rogers doubling a knotty countermelody that dances gracefully around the syncopated groove of the rhythm section. A veteran of multiple Dave Holland projects, Sipiagin's writing often draws from that school of thought, but seldom has it done so with more clarity than on this track. The underlying rhythms may be complex, but the downbeat and groove are always in the foreground. During the solos, the band succeeds in maintaining a constant groove, even while the soloists push and challenge the rhythm section at each turn.

"Way to Her" is a moderate ballad that combines a searching melody with colorful modern harmony. The groove stays fairly consistent until Escreet chimes in with a particularly daring solo that pushes the rhythm section into new territory. As it's name would suggest, "Momentum" keeps things moving forward with a verbose, hectic melody, punctuated by syncopated hits from the rhythm section. Each soloist takes the music in a new direction and the band is there to follow them through every twist.

"Echoes of Thought" is a perfect example of Sipiagin's ability to take a simple theme and build a complex, multifaceted composition around it. The trumpet carries the melody with the alto there to echo Sipiagin's melodic thoughts with Rogers eventually adding further depth to the piece with another distinct melodic line that grows out of the original theme. Of all the tracks on the album, this one most resembles the music from Destinations Unknown, particularly the strong thematic writing on the track "Tempest in a Teacup." Sipiagin showcases his warm, round tone on "Balance" with a lyrical melody that weaves elegantly around Binney's understated countermelody.

The final two tunes are contributions of David Binney. "Yragon" starts out delicately but soon morphs into an anthemic rock groove, typical of much of Binney's original music. "Trio Whale" takes things in a more rock-driven direction with overdriven guitar and keys pounding out a catchy four-chord riff. The music is fun, and freewheeling but these last two tracks feel slightly out of place next to the rest of the music on the album.

Sipiagin's music has never shied away from straight-eighth grooves or electronic instruments and with "Balance 38-58" he takes a step further into "fusion" territory. While moving forward into new territory, Sipiagin does so with the panache that has made his past music exceptional. His polyphonic composition style and intrepid approach to improvisation are still in the spotlight here, but this time around the spotlight is a slightly different shade. This is another excellent addition to Sipiagin's growing discography that once again proves him to be a powerful presence in today's jazz scene, both as a prodigious player, and a distinctive, innovative composer.