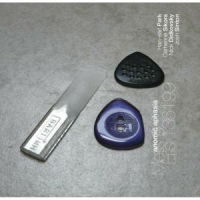 The music on Han-earl Park's third CD for Slam, Anomic Aphasia, derives from two similar but significantly different Park projects. The first is Eris 136199, an improvising trio consisting of guitarists Park and Nick Didkovsky (leader of Doctor Nerve) plus saxophonist Catherine Sikora. Described by Park as "the noisy, unruly complexity of the ensemble Eris 136199" they are responsible for the opening and closing tracks, "Monopod" (seen, on the actual day of this recording, in the YouTube clip below) and "StopCock," which have durations of twenty-seven and eleven minutes, respectively, the lion's share of the album's seventy minutes. Both were recorded live at Douglass Street Music Collective in Brooklyn in June 2013.

As the clip shows, Sikora was situated between Park and Didkovsky. The guitarists' two very different styles could have clashed, but they find ways of fitting them together that leave space for the saxophone. Sikora could have been crowded out but she skilfully adapts to the soundscapes created by the guitars, and integrates her playing without compromising her style. We get to hear all three of the possible duos play, as each of the three occasionally takes a back seat, but for the majority of the time they all play together. At times that playing does fit Park's "noisy, unruly complexity" description, but when they are in full flow together, their exchanges fit together perfectly and are simply exhilarating, sometimes verging on lyrical.

The second of those two projects is the "interactive playbook Metis 9, a collection of improvisative [sic] tactics, and higher-level interactive macros for ensemble performance." In other words, it may be a piece of software designed by Park as a stimulus for improvisers, recalling the "machine improviser" that he featured on io 0.0.1 beta++ (Slam, 2011). Unlike that automaton, which performed alongside its human bandmates, Metis 9 does not perform but "provides secondary or tertiary tactics that create an additional focused complexity. The decision for each bloop and bleep is still retained by the ensemble." As may be obvious from the quotes, it is not entirely clear what and how Metis 9 communicates to the musicians; surely it cannot be suggesting "bleep now"? Even YouTube clips of Metis 9 test runs are unenlightening as the players seem to display no behaviour atypical of improvisers. For now, until more information is forthcoming, The Case of Metis 9 must remain unsolved...

Irrespective of Metis 9, key to the success of the album's middle three tracks is their line-up of Park and Sikora with Josh Sinton on baritone saxophone or bass clarinet; one guitar plus two reeds works better than one saxophone plus two guitars. Aurally, the separate contributions of these three individuals are easier to determine. Sinton's confident, fluent improvising stands out as this trio's trademark sound and gives it the edge over Eris 136199. The interweaving of the trio's three strands works effectively, with credit going equally to each member. It would be good to hear a full album from this trio. Without wishing to discourage Park's innovation and experimentation, taken as a whole, the key message of Anomic Aphasia seems to be that it is difficult to beat good old-fashioned improv.