Sun Ra Arkestra Under the Direction of Marshall Allen: Babylon

BY MARK CORROTO
October 9, 2015
Sign in to view read count 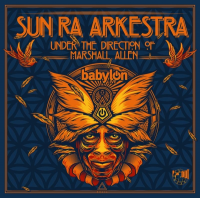 If the recording Babylon is any indication, the second century of Sun Ra's music will be as entertaining as the first hundred years. Recorded live at Istanbul's Babylon Club in 2014, the full effect of Sun Ra's Arkestra is captured in all its glory with this CD and bonus DVD recording.

The Arkestra has been under the direction of nonagenarian Marshall Allen since Sun Ra's death in 1993. Allen, an alto saxophonist and sideman to Ra since the 1950s, has been the keeper of the interstellar flame and face of the Arkestra. His efforts have recruited the amazing talents of Lincoln Center Jazz Orchestra pianist Farid Barron and singer Tara Middleton, who fills in for the departed June Tyson.

Opening with "Astro Black," the percussive pulse propels the strength of Middleton's vocals, then the 14-piece Arkestra, beyond earth's orbit with "RA#2," a Sun Ra rehearsal piece Allen expands into a 10-minute charge with tenor saxophonist James Stuart firing his afterburners. Gone are the infamous John Gilmore, and Pat Patrick, but the new disciples are ready, willing and more than capable of this space mission.

Allen casts the music of the swing bands against his love of free blowing here. Hoagy Carmichael's "Stardust" is gently delivered first, with the haunting vocals of Middleton, then the Arkestra guides it to an eerie rest. No doubt, this is feel-good party music. Just like the days of old, the members of the Arkestra play music untethered by gravity and time. Ellington is referenced, as is the 1960s blues boogie of "Unmask The Batman" (on the DVD only). It was a product of a little known side project Batman And Robin where Sun played piano along with Allen. While this track is not on the original Dan & Dale recording, it was cut as a single by Ra.

The Arkestra finishes the concert like they've done, well, forever, chanting and marching through the audience. Long live Ra!