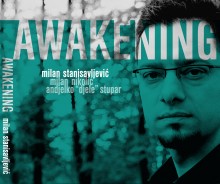 Milan Stanisavljević evokes the intimacy of a trio to set up some evocative images on his debut CD, Awakening. The pianist has his vision and his focus in clear perspective; this is a jazz recording, the music well within the mainstream, even as Stanisavljević finds his calling in swing and blues. Tempering that approach is the solid empathy that he has with drummer Andjelko "Djele" Stupar and bassist Milan Nikolic.

Stanisavljević began playing piano when he was eight in his hometown of Kragujevac, Serbia. His initial interest was classical music, but a change came about when, in high school, he was given the score of "Rhapsody in Blue." From then on it was jazz, as the music of Erroll Garner, McCoy Tyner, Wynton Kelly and Freddy Gardner infused his senses.

Given the nature of things, it is appropriate that the name of the CD and the opening track is "Awakening." The strings of the bass turn in a Spanish-tinged melody before Stanisavljević explores the outskirts of the tune and then the soul of the song. He plays with cool deliberation, letting the notes rise and make a statement into which he infuses a gentle swing. With the mood now elevated, Stanisavljević opens up a commanding presence through his lyrical flow of notes, while Stupar fleshes the rhythm in a splash of colors that dance from his cymbals.

The explorations that usher in "Day & Night" settle in as Stanisavljević creates a context into which he weaves a beckoning spell of ideas. He goes from an intimate atmosphere to an open, lively one, working a skein of inventions with strong harmonic concepts.

The easy interaction amongst the trio adds to the impact. On "Chico's Blues," Stanisavljević changes the pith and tempo, moving from lyrical propulsion to gentle ruminations on the quick. Nikolić and Stupar are both tuned in, picking up the nuances and forging kinetic alliances on the thicker textures.

Stanisavljević makes a mark with this debut; not only does he show himself to be a pianist with an esthetic that translates into stimulating ideas, but also one who can write a great tune.