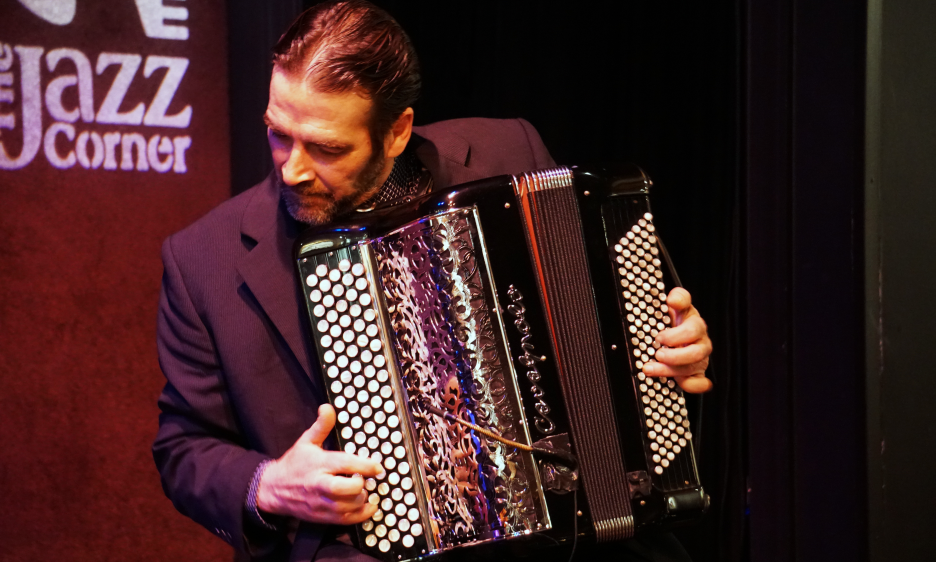 Gypsy Jazz or Manouche was the invention of Django Reinhardt whose sound came from old gypsy tunes played with a swing rhythm. During the inter-war years, Django heard Louis Armstrong and Duke Ellington in Europe's playground, the South of France. He added swing to his own compositions which became anthems during the occupation of France. Django's own unique guitar style was caused by the loss of two fingers on his left hand in a caravan fire. The gypsy repertoire was supplemented by Russian Folk music which came to Paris with emigres fleeing the Russian revolution. Paris remains the epicenter of the style. The gypsy people play portable instruments to fit their nomadic lifestyle. Frederic Gomes came in from Paris to play the Jazz Corner on his Cavagnolo accordion, made in Lyon, France. It's an all-button accordion with a valve to maintain pressure on the reeds during fast passages whether the bellows are being opened or closed.

They started with "Que reste-t'il de nos amors" (I wish you love). After the accordion played the theme, the solo passed to Dr. Sasha Strunjas playing a 70-year-old guitar built by Horace Bucolo of Catina, Sicily, a center for gypsy jazz guitar luthiers in the immediate post-war period. The tone, clarity, and projection of this classic instrument, built of old world materials, was remarkable. Next to play was Dan Coy from Atlanta, Georgia, they followed the Django Hot Club style, alternating one guitar as lead with the other as rhythm playing La Pompe, the pump guitar technique which adds the short skip swing note. George Scheck played some exceptional bass solos during the performance. The first set included a swinging "Lady be Good" (Gershwin, 1924), and classic Parisian tunes "J'attendrai" (I will wait), "Nuages" (Clouds) and "Daphne."

Gomes stood up and played an elaborate, dramatic introduction as he walked among the tables; he turned towards the stage and nodded to Strunjas who began to sing the beautiful classic "Dark Eyes" in the original Russian. The audience picked up the rhythm and started clapping along until Strunjas sang again. A long note announced the accordion's return, followed by an impossibly fast solo heralding the start of an accelerating section. The guitars and bass racing faster and faster carried the clapping audience along to a thrilling finish to the first set.

The second set started with another Parisian classic "La Vie en Rose" (Life through rose-colored glasses) written by Edith Piaf. The sweet, romantic sound of the accordion took hearts and minds to the Left Bank where a club of that name once existed. The lyric speaks eloquently of a romance "When he takes me in his arms and whispers low, I see, La Vie en Rose."

So to Django's "Minor Swing" featured in the attached video, then "Manoir de Mes Reves" (Castle of my Dreams) and "Belleville" which is a suburb of Paris. Strunjas sang again in Serbo-Croat "Songe d'Autonme" (Autumn Dream), a waltz originally written by Archibold Joyce for The White Star Shipping Line; it was included in the 1912 songbook on the ill-fated maiden voyage of the "Titanic." They came to an end with another French piece "Les Feuilles Morts" (The Autumn Leaves), and as an encore, they played the perennial "I love Paris."

This was pure Parisian romance, played by the sweet accordion which is forever associated with the city. It swings along joyously, taking the edge off the sadness and drama, nostalgia and romance, whether in revolutionary Russia or occupied Paris. The fiery musicians played rare instruments of the era, lending authenticity to the music, lighting up the room with emotion, energy, and excitement.