By BRUCE LINDSAY
January 14, 2011
Sign in to view read count 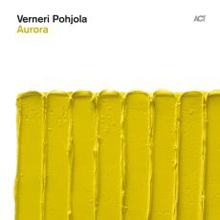 Finnish trumpeter/composer Verneri Pohjola comes from a well-established family of jazz musicians: both his father, famed bassist Pekka Pohjola, and his younger brother, trombonist Ilmari, join him here. Pohjola was voted Musician Of The Year by Finnish jazz critics in 2004, but Aurora is his debut as leader. This is a work of immense beauty which benefits not only from Pahjola's expressive trumpet playing and writing, but also from exceptional musicianship from every single one of its 15 players.

The album's tour de force is the intriguing and dramatic "For Three," a hauntingly lovely tune. At its center is a sweepingly majestic and melancholy theme, played in unison by horns and strings; an immediately affecting theme that lingers in the memory. The percussion is astounding; hard-hitting, almost aggressive at times, it stands in stark contrast to the soft beauty of the other instruments, and yet it serves to accent rather than overwhelm the tune's melancholy.

Pohjola's five other compositions are characterized by the same spacious and measured arrangements, and create similar soundscapes that meld moments of intense joy with periods of delicate sadness; each one a small masterpiece. Sadly, there's no indication as to which of the three bassists and three drummers play on each track—the rhythm sections are all magnificent, but it would be good to know exactly who was responsible for each tune.

"Colossus" is the closest the album comes to an upbeat groove, thanks to some exceptionally funky double-bass and percussion. Most delicate of all is "Spirit of S," which finds flautist Juhani Aaltonen at the fore, alongside Pohjola. The album closes with the quirky "At The End Of This Album," whose warm analogue sound and simple keyboard-led melody could serve as the finale to a '50s Western movie.

The album's only non-original is Joaquin Rodrigo's "Concierto de Aranjuez Amour." Pohjola is an avowed Miles Davis disciple, so the tune is not a surprising choice, but Pohjola's arrangement invests the tune with a sparse delicacy that is missing from Davis' own version on Sketches Of Spain (Columbia, 1960). Accompanied only by gently sparkling percussion and a simple but supportive double-bass, Pahjola's trumpet soars—until, just a minute or so from the end, he bows out abruptly, replaced by pianist Aki Rissanen.

Originally released by Finland's Texicalli Records in 2009, Aurora has now been taken up by Germany's ACT Music. The album is graced by another lovely ACT Music cover image, and by exceptional sound quality. In every sense, from the cover art to the production, the writing to the performances, it's a strikingly beautiful debut that emphatically establishes Pohjola as a potential international jazz star.

Akvavit; For Three; Askisto; Boxer Diesel; Spirit of S; Colossus; Concierto de Aranjuez Amour; At The End Of This Album.