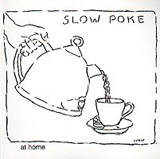 Slow Poke was a unique band, even among the fertile late nineties Downtown (New York) scene. Gradually warming to neo-classical formalism, various Downtown line-ups began incorporating traditional elements into their compositions, progressively moving beyond their No Wave roots by embracing a more traditional aesthetic. Blending accessible tunefulness with adventurous improvisation, ensembles like Ballin' The Jack, The Jazz Passengers and Sex Mob all embraced various aspects of the mainstream, but none with as much melodic assuredness as Slow Poke.

Saxophonist Michael Blake, slide guitarist David Tronzo, bassist Tony Scherr and drummer Kenny Wollesen recorded At Home at Scherr's house in 1998, self-releasing it two years before their official label debut, Redemption (Intuition, 2000). A mix of bluesy atmospherics and soulful reflection, this off the cuff meeting of friends embodies the camaraderie of a freewheeling, casual jam session with a dedicated focus on melodic development.

With its ebullient polyrhythms peppered with delectable melodious kernels and kaleidoscopic counterpoint, Blake's highlife-influenced "Afro Blake" introduces another side of the band. Duke Ellington's "Rockin' In Rhythm" is given a punchy funk twist while "Make Out Machine" is a buoyant, celebratory excursion.

Rich with dusky soul and bluesy slow burn, Slow Poke trades flashy virtuosity for melodic maturity and lyrical finesse. Reissued by Palmetto Records, At Home is a gorgeous recording devoid of pretension, and a perfect opportunity to hear four masters unwind as they explore the subtlety of well crafted tunes.