By MIKE JURKOVIC
October 13, 2020
Sign in to view read count 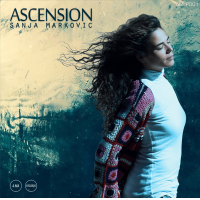 In lesser hands, the complement of nineteen musicians she has at her side and ready, and the seven questing, spacious songs of Ascension could have made this compelling endeavor come off unwieldy, unruly, or worse. But Markovic, whose creative instincts prowl the fertile crescent valley where mid to late 70's Joni Mitchell (then consorting with the L.A. Express, Pat Metheny and then, to cap it all off, Charles Mingus) meets the burgeoning tangle mystery of sound that Euro/New York/world urbanization can make. It allows for every creative sharp angle to become a color within the larger frame. An added voice to the prayer. It's a good place to be.

From the opening title track, her voice doesn't so much pull as lure you in. At first it's the lone, clear instrument rising out to call mankind to good action and higher reason. Then her shadowy contralto begins its vigorous game of hide and seek through her beware-of-dark-ice arrangements, making each track its own world (the coercive jazz/pop of "It Has Always Been") within a world (the deductive, noir undertow of "Zhega') within a world (the rich clarity of "Sovereign State of Mind.") Highlight performances from individual players abound but are far too many to note, but rest assured they create Ascension pretty much as one suspects Markovic heard it: as a tapestry of promise, the groundwork to better and bigger things.