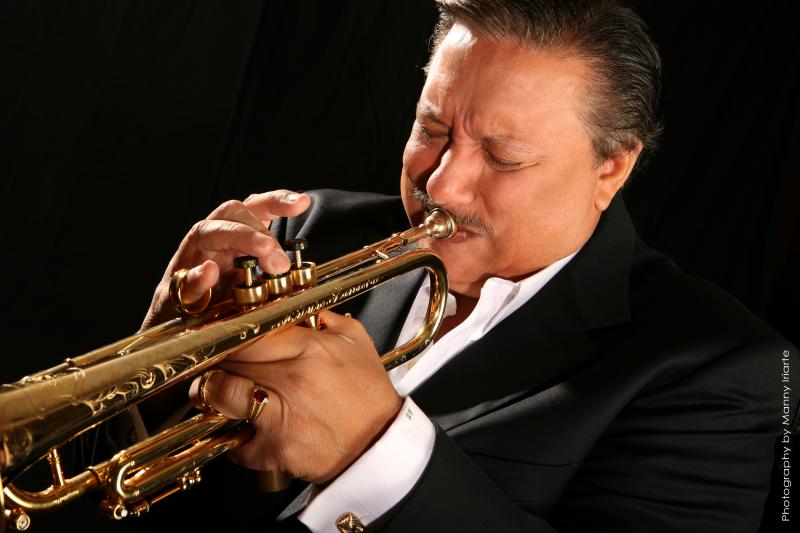 The excitement about any Arturo Sandoval performance builds from the time you see his name on an events list and think of his affiliation with Dizzy Gillespie, his tenure with the group Irakere, his stunning career trajectory with ten Grammy awards, films, TV appearances, and the Presidential Medal of Freedom award, and his well-known virtuosic trumpet playing combined with his spontaneous and sincere personal presence. There is no question that this concert delivered everything you would expect from an unstoppable larger-than-life musician who almost four decades ago thrust himself on Dizzy Gillespie when the latter arrived in Cuba, asked for a break, and has been going strong ever since as one of the great contributors to the jazz/Latin crossover which Gillespie largely initiated. Moreover, his backup group generates the same sort of musical energy that Sandoval does. The alleged quintet (with six musicians, it should be called a sextet, but what the heck) is a multi-engine Latin-powered rocket that took off and stayed in orbit for an almost two-hour performance—and the audience wanted more!

The one problem is that, with all this power and energy, it was hard to hear the nuances of the music itself. Like a rocket that has to reach breakneck speed to get into continuous orbit, the emphasis on velocity obscured some of the scenic musical views, and the emphasis on entertainment gave a circus-like ambience to the event that left the more reflective part of the music in the dust. Sandoval's personality and humor conveyed sincere friendliness, but his extended periods of scatting, while brilliant and clever, wore thin after a while. His super-rapid runs and above-the-staff high notes on trumpet were more show-offish than they were pertinent musically. And his attempts at drumming, keyboards, and piano playing created a feeling of being in a music school during a practice session. Shoemaker, stick to thy last.

When this reviewer could step back and get free of the distractions, he heard some really exquisite music sandwiched in. Sandoval's vocal and trumpet rendition of his tribute song, "Dear Diz, (Everyday I Think of You)," was a beautiful, well-performed ballad reminiscent of Benny Golson's tribute to Clifford Brown, "I Remember Clifford." His performance of Brown's standard, "Joy Spring," was masterful, with some brilliant improvising by both Sandoval and saxophonist, Ed Calle. Calle kept up the pace with Sandoval throughout, and more than that, was able to execute superbly dense harmonic sequences and changes, whether with Latin, mainstream, or avant-garde structures. Pianist Kemuel Roig provided solid comping as well as solos that were exciting yet well-controlled. In the encore, Gillespie's "Night in Tunisia," percussionist Armando Arce did an extended solo on hand drums with perfect timing and execution, while generating great musical ideas from the variations in drum pitch. Drummer Alexis Arce (they are brothers) followed up with a fantastic drum solo with stunning polyrhythms and powerful energy that derives from combined Latin and mainstream jazz influences. These are sensational musicians, but their contributions were obscured by the overall emphasis on entertainment, excitement, and speed.

With a touch of well-intended humor, it could be suggested that Sandoval call his group "The Flying Wallendas of Jazz." And the audience dug it, the way you would dig Ringling Brothers, a fabulous party, or attending the Indie 500. But frankly, this reviewer would rather hear players of this caliber hunker down and make a simple musical offering without all the pyrotechnics. A few years ago, a Latin group formed by trombonist Conrad Herwig and trumpeter Brian Lynch delivered exquisitely crafted Latin-based interpretations of John Coltrane that were spellbinding, and every note had something meaningful in it (Conrad Herwig—Brian Lynch: Que Viva Coltrane, Chris Cross Jazz, 2004). Whatever else you might say, such a disciplined approach provides a much better role model for an aspiring musician. It's not that Sandoval isn't a great artist in his own right. It's just that his focus on the "dog and pony show" doesn't do his own music justice. In that respect he could take a cue from his hero Dizzy Gillespie. Dizzy could be as funny and entertaining as anyone, but when he picked up the trumpet, he became still and focused, holding back ever so slightly on the rhythm, getting the notes right and nuanced to convey exactly what he wanted to say. He was never "flashy" in his playing. That's why he had such a lasting influence. That's what real jazz artistry is all about.