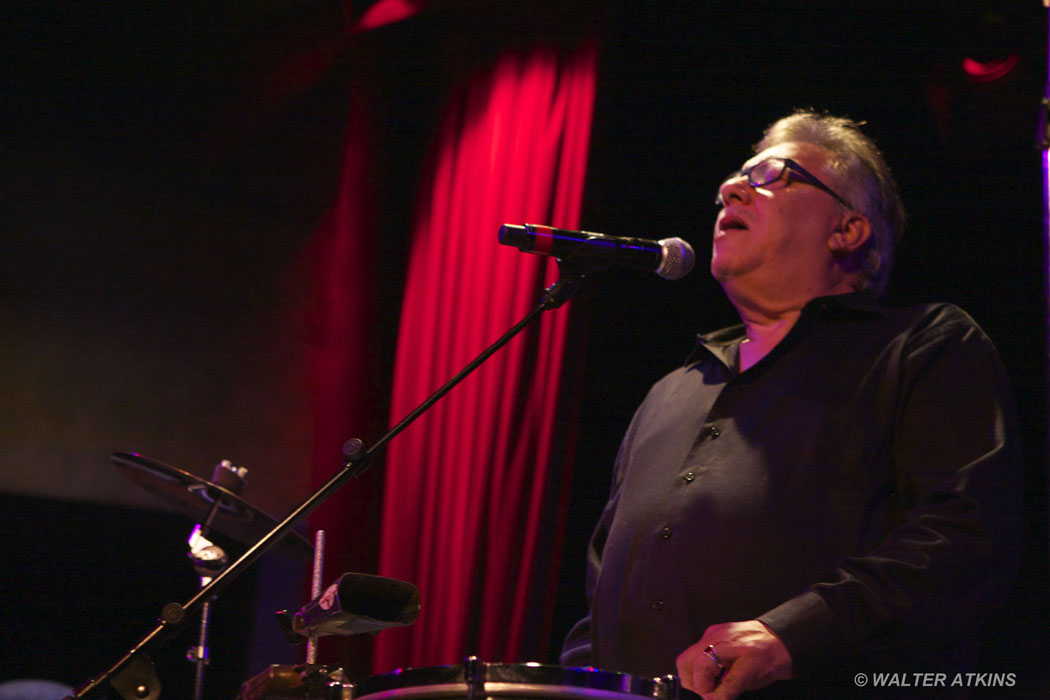 His crowd pleasing second session boasted "Blues in Bb" (Sandoval),"Smile," "There Will Never Be Another You," "Sureña" (Sandoval), and "Jam" , a funky Cuban music improvisation. The second show closing encore was "All The Things You Are."

During the blistering set, the Cuban born, six time Billboard and Emmy Award winner asked the jubilant Yoshi's house, "Are you having fun?" Sandoval received thunderous confirmation to his rhetorical question. When the band implored the crowd to, "Shake your booty," the keyboardist played a long rocking solo.

According to local East Bay resident and retired commercial photographer nick named Dr Porky, "He (Sandoval) loves funk. He's playing Funk-Pop!" Sandoval recognized this long time patron along with his buddy sitting up front from the early set. He said, "We have to do something different and can't play the same stuff. That guy in the first show-need more customers like you," Sandoval joyfully stated to the spirited venue. He improvised something new that included some of his Dizzyesque vocalese in a warm tribute to his early sponsor and friend, the beloved trumpeter Dizzy Gillespie.

Among his numerous awards, Sandoval has also received a honorary Doctorate in Fine Arts from the University of Notre Dame in 2016. After introducing the band members, he asked this photojournalist, "Your camera on a roll? I never see the pictures." I assured him he would see the images, and also some from his gig at the Vancouver Jazz and Wine Festival.

As he comfortably strolled among his large audience, Sandoval asked a favor. "When you get home, leave the TV off. Off! So much bad news and BS. Instead of TV on, listen to the song we're going to play." The tune was the quietly encouraging "Smile" originally composed by the actor Charlie Chaplin, with lyrics later added to it by John Turner and Geoffrey Parsons. Sitting at a customer's table, he serenaded the astonished fan. When Sandoval finished the standard, a supporter shouted, "Beautiful," during the massive applause.

Sandoval talked about the time he had to do a 7 AM radio show after playing two long sets the previous night. Later, he was pleasantly shocked when his early morning performance was captured and put on line. He proudly commented, "It is the most viewed video in my life on iTunes now." The band then went into "There Will Never Be Another You." "Are you sure it's like this?, he asked his able band. A haunting keyboard solo was included.

Among the many funky solos by Sandoval's crack band, special guest Carlos Reyes' engaging work on violin was inspiring. The trumpeter remarked when he added gringos to the band, he was asked to be more precise when pronouncing English song titles. His band had the house moving to polyrhythms on the next track that featured percussionist Pasillas taking center stage singing and playing the maracas. Sandoval also played keyboards and timbales at various times in the concert. Sandoval joked, "Money's not everything in life (pause) only ninety five percent."

Referring to his popular brand of Afro Cuban jazz, he said the audience was wonderful and not everyone would get it. Then Sandoval proclaimed, "Let's play some salsa," and his musical team mates fired up blistering Afro Cuban rhythms that had the attendees standing up for the finale. Arturo Sandoval and his outstanding band closed the night with a standing ovation by a crowd who got it and enjoyed it.