Six years after the release of his solo debut, Golden Age (Okeh, 2014), Nir Felder's follow-up II brings into sharper focus some of the guitarist's more compelling dichotomies as a player. His instrument of choice is the usually more crystalline-sounding Stratocaster but Felder somehow elicits a fatter-than-a-big-ol'-jazz-box tone from it. His style as a soloist has way more in common with Jim Hall than Jimi Hendrix but he more often favors flailing big ringing open-stringed or power ... 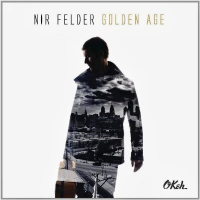 There were a few strong reactions when Nir Felder was donned “The Next Big Jazz Guitarist" in a 2010 NPR article. The in-demand New York based musician is seemingly unfazed by the headline and continues grinding out a stream of constant gigs and sessions associated with the likes of Greg Osby, Terri Lyne Carrington, and more recently, drummer Rudy Royston's debut 303 (Greenleaf Music, 2014). In spite of frenzied scheduling Felder has cultivated his music in the long overdue debut, ...