For several decades, Victor Lewis has been one of the most in-demand drummers of the post-bop era and beyond. He has performed with Stan Getz, Dexter Gordon, J.J. Johnson, Chet Baker, George Cables, Woody Shaw, Kenny Barron, Bobby Watson, and others of similar stature. On account of his exceptional ability to push the envelope of musical grace in a variety of contexts, he often becomes their drummer of choice for extended tours and engagements. Other drummers consider him a role ... 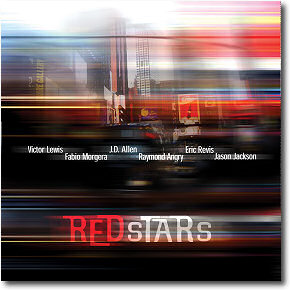 The leaders of this excellent album all record for the Italian Red Records label, hence the title, Red Stars. However, the album is essentially Fabio Morgera's conception. He produced it, and it was his idea to merge straight-ahead, swinging jazz with some electronic elements, and on Eric Lewis' tune “Jennifer," a pronounced backbeat. Those purists who insist on limiting jazz only to acoustic instruments probably aren't going to like Morgera's electronically altered trumpet, but other listeners should dig the great ...

Victor Lewis is one of today’s finest drummers. His talents were recognized early on as he performed with some of the greatest players. Dexter Gordon, Woody Shaw, and Stan Getz have all taken advantage of his skills. He also co-led the band Horizon with Bobby Watson, one of the finest working bands in the past decade. Victor Lewis is also an excellent composer and six of his tunes appear on EEEYYESS!. If, like me, you have missed the music of ...