Twenty-two years into his career, Albany, New York's Stefon Harris has fronted seven Blue Note LPs, served as co-lead on two others and recorded with a host of greats including Joshua Redman, Ry Cooder, Courtney Pine and Christian Scott. Because that's not enough for the 45-year-old, he's also a successful educator, public speaker, entrepreneur and an eloquent interview. He and I spoke last week about his upcoming Blackout album, Sonic Creed. All About Jazz: “Dat Dere," ... 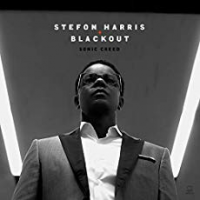 Within the realm of modern jazz, the vibraphone has long enticed unusually imaginative musicians to explore the possibilities of the instrument. Milt Jackson, Bobby Hutcherson and Gary Burton have essentially reinvented the vibes for successive generations, while Warren Wolf and Yuhan Su, among others, continue to reconfigure its appeal to entice contemporary audiences. Respective studio works of Stefon Harris and Joe Locke demonstrate how each may also be rightfully numbered among the modern visionaries of the vibes, the records also ...

Musician and composer Stefon Harris wears many hats. But he wears them all well. He is a composer, performer, bandleader, businessman, educator and leadership trainer. He handles each with a clear head, confidence and sense of purpose. He's bright, articulate and relates to people on any level. Harris' to-do list on any given day can involve the fact that he is associate dean and director of the Arts Department at the Manhattan School of Music. ...

In its most basic function, the music that makes up Sonic Creed serves as a mirror to African American life in the here and now. It explores the history, legacy, struggles, and joys of the Black community, speaking to all of it at once through sound and sentiment. Sonic Creed arrives almost a decade after this groove outfit's last showing--Urbanus (Concord, 2009)--but the time away hasn't hurt the band. If anything, Blackout has become a more limber ...

On paper, Ninety Miles was a tantalizing project from the beginning; bringing together three of the most exciting voices in modern jazz--Puerto Rican-born tenor saxophonist David Sanchez, New Orleans trumpeter Christian Scott, and New York vibraphonist Stefon Harris-- and transport them to Havana to play with two outstanding, piano-led Cuban jazz quartets. The American red tape took a year to negotiate--which shows a dogged determination of sorts on all sides--but the musical connection that resulted was clearly instant, judging by ...

They're all relative youngsters in a jazz world that still finds nonagenarians like Dave Brubeck hitting the summer festival circuit. Tenor saxophonist David Sánchez may be the elder statesman on the marquis of Ninety Miles, with vibraphonist Stefon Harris in the middle position at 38 and trumpeter Christian Scott still on the shy side of 30, but each of them has already made his mark, making this an all-star in-the-making American/Cuban collaboration on an upward trajectory. Scott's ...

Stefon Harris is like one of those small, wiry running backs that gets the job done through finesse and quickness rather than brute force. Indeed, at his concert Thursday night at the Mt. Vernon Country Club, Harris sometimes darted back and forth in front of his vibraphone reaching between the bass clef and treble clef like a ball carrier cutting ...