Legendary fusion drummer Billy Cobham and his quartet performed at the multi-genre festival the Symphony of Art in Bratislava together with the Gustav Brom Radio Big Band on September 11, 2021. Cobham's quartet—comprised of Steve Hamilton, Ulf Wakenius, and Fifi Chayeb (bass)—along with the Gustav Brom Radio Big Band dazzled with compositions including “Panama," “A Days Grace," “Sweet Bocas," and “Cancun Market."—all from Broad Horizon, a 2016 recording with the Frankfurt Radio Big Band. The concert concluded with the iconic ...

On today's program we dial it back to the '70s, with Billy Cobham, Jean-Luc Ponty and a feature on British jazz-rock from Gary Boyle and Isotope. Playlist Billy Cobham “Nickels and Dimes" from Inner Conflicts (Atlantic) 00:00 Larry Coryell “The Last Peavey" from Larry Coryell's Last swing with Ireland (Angel Air) 07:18 Jean-Luc Ponty “Infinite Pursuit" from Fables (Atlantic) 14:35 Gary Boyle “The Dancer" from The Dancer (Gull) 22:01 Isotope “Golden Section from Illusion (Gull) 29:21 George Duke ...

Few if any jazz-fusion drummers have been more influential than Billy Cobham, along with his modern jazz drumming for legends such as Freddie Hubbard, McCoy Tyner and other notables. Yet touring has its trials and tribulations, noted in the album liners on this previously unissued 2-CD set, presenting live material from the drummer's 1997 show at the Compass Point Hotel in the Bahamas. With impending storms on the horizon and the only piano tuner in the vicinity not showing up ...

The universe is engaged in a miraculous rhythm that is the ultimate timekeeper. Due to his pivotal role in an important new documentary film, Billy Cobham, a master timekeeper himself, is now more aware of this than he has ever been.

Early in Cobham's career he played with Horace Silver, Miles Davis and in the pre-fusion band Dreams. But he is best-known as the propulsive drummer of the genre- twisting Mahavishnu Orchestra, who ruled the jazz-rock ...

I came to Billy Cobham not through Mahavishnu, but through video footage of him playing with Horace Silver’s group in the late 60s. Initially I mistook him for Roger Humphries, who of course had appeared on some of Silver’s well-known albums during that decade. I was later corrected by a friend of mine, who not only told me that it was indeed Cobham, ...

The Good Book of fusion drumming, culled from a half-dozen years in the life of Billy Cobham. After serving in drum corps, the High School of Music and Arts, and the Army band, as well as gigging and recording with Kenny Burrell, George Benson and Junior Mance, Panamanian native Cobham was finally recommended by Jack DeJohnette to Miles Davis in 1969. Things took off like a bullet from there, and soon enough Cobham was firmly established as the Hot New ... 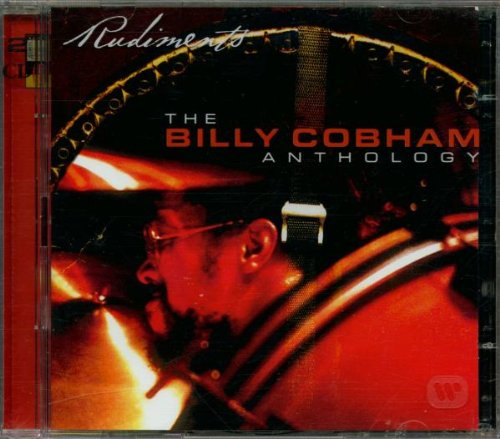 Rudiments: the Billy Cobham Anthology is a representative collection of songs associated with drummer-composer-bandleader-producer Billy Cobham assembled from the highlights of eight Atlantic releases between 1973 and 1978. This was a particularly fruitful time for Cobham that saw the percussionist recording with the likes of the late Tommy Bolin, Jan Hammer, George Duke, Michael and Randy Brecker, John Scofield, Cornell Dupree, and John Abercrombie. The songs are taken from: Spectrum (Atlantic 7268, 1973)Crosswinds (Atlantic 7300, 1974) Total ...