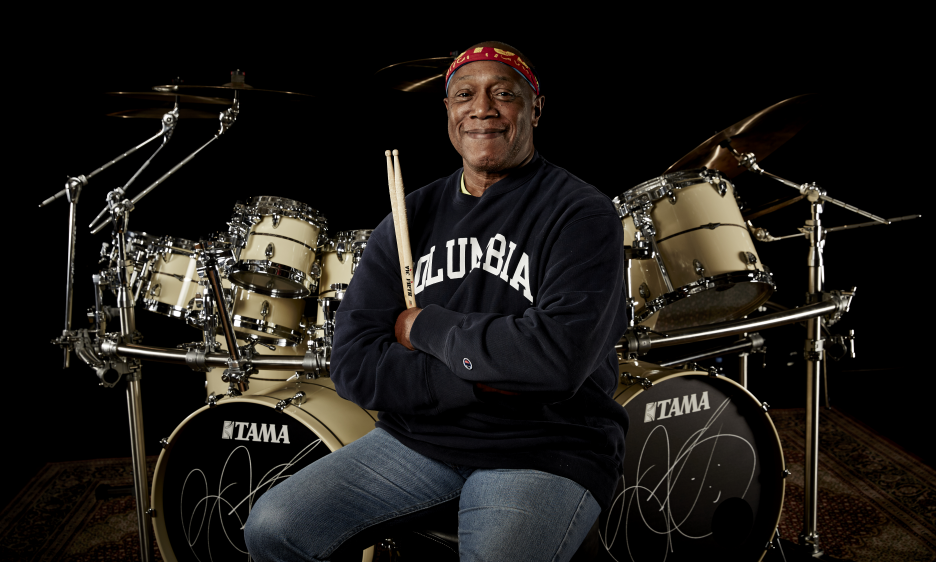 By Geoff Anderson
October 3, 2022
Sign in to view read count

The notes-per-measure count is down a bit, but the creativity and precision remain.

"Age ain't nothin' but a number." That's a common mantra chanted by the militantly aging. "Everything wears out." That's a quote from a wise auto mechanic. When those two concepts meet:

Saturday night, drummer Billy Cobham demonstrated exactly how to skirt any potential wreckage and carry on despite the inevitable deterioration wrought by Father Time. At age 78, Cobham has been behind the drums for well over 60 years. He was around for the birth of jazz-rock fusion, playing with Miles Davis and the Mahavishnu Orchestra. And he set the standard for fusion drumming.

By the time Cobham released his first album under his own name, Spectrum (Atlantic, 1973), he'd developed a style to match the rapid-fire playing of other fusion stars such as John McLaughlin. Early fusion valued an extremely high note-per-measure count and Cobham consistently ran his totals into record territory. Fusion fans had taken note of his playing with Davis and Mahavishnu, but Spectrum brought him much wider renown when it reached No. 1 on the jazz charts and No. 26 on the Top 200 Albums chart.

The album Crosswinds (Atlantic, 1974) followed with more high energy fusion and precision drumming at breakneck speed. This one reached No. 2 on the jazz charts and 23 on the Billboard Top 200 Albums. Crosswinds also continued a tradition that started with Spectrum with Cobham composing all the music on the album.

Now, nearly 50 years after these seminal albums, Cobham is still at it. Many of his bandmates from those early albums haven't been so lucky and they played their last concerts years ago. Players from those early LPs who are no longer with us include guitarists John Abercrombie and Tommy Bolin, keyboardist George Duke, woodwind men Joe Farrell and Michael Brecker and trombonist Garnett Jnr Brown.

After all these years and all that drumming, Cobham has slowed just a bit. The notes-per-measure count is down a bit, but the creativity and precision remain. Saturday night's audience heard a frequent double bass-drum attack and runs across four or five tom-toms punctuated the livelier songs. In contrast to his seemingly superhuman playing in his youth, Cobham's drumming now sounds more like an extremely talented mortal. Chatty throughout the evening, Cobham discussed the worn-out parts problem when he told us of his recent hip replacement. That's on top of a new knee or two in years past.

Saturday night, Cobham brought a quartet to the Gothic Theater. The original billing called for guitarist Mark Whitfield to be in the band. But upon entering the theater, we saw that the stage setup had no guitar or amplifier. However, a soprano and tenor sax sat at stage right waiting for the show to start. The saxophonist turned out to be Brandon Wilkins, apparently a very last-minute addition to the band. He used a music stand throughout the set and was obviously reading the charts as the band worked its way through the evening. But the only audible mistake came when Cobham initially introduced him as "Randy Wilkins." The other two band members quickly corrected him. Cobham mentioned that Wilkins had very recently stepped in and saved him. We heard no explanation for Whitfield's absence. As a composer, it's likely that Cobham has written charts for all his tunes on hand and could quickly place the music in front of Wilkins who, as a Berklee School of Music grad, could sight-read his parts and then throw down numerous solos when necessary.

The other two band members have been with Cobham somewhat longer; Scott Tibbs on keyboards and Tim Landers on bass. Tibbs played a variety of synthesizers as well as electric piano and recreated many of those 70s synth sounds. Landers played fretless as well as fretted bass. His fretless bass playing, in particular, sounded occasionally like Jaco Pastorius without the bombast, it was more of a similar tone that Pastorius popularized in the late '70s and early '80s.

The tour is being billed as "Billy Cobham's Crosswinds Project" so, of course, the set list included many tunes from that album, including the title track which kicked off the set. The band also played a couple tracks from Spectrum, but the evening wasn't all '70s nostalgia. Cobham has continued to write and Saturday night's set included a couple of new pieces, including "Paseo Del Mar," which Cobham said will be on the forthcoming Crosswinds II album. Another new song in the set was entitled "Becalmed." Cobham was born in Panama and he rode out the recent COVID quarantine there. He told us how, during lockdown, he could sit on his balcony and see cruise ships at anchor with nowhere to go and no passengers. As the name implies, "Becalmed" was a quiet tune and a nice break from the more intense side of Cobham. "Savannah the Serene," a song from Crosswinds, was another that emphasized melody over pure note count.

At the end of the evening, Cobham announced that the new titanium piece screwed into his femur as part of his hip replacement was screaming at him and he only had one more tune in him. So, the parts can wear out and maybe age is something more than a number. But as long as there are replacement parts out there coupled with the will to carry on, musicians like Cobham can keep on doing what they so obviously love and the rest of us can enjoy the dividends.