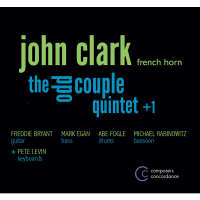 Yes, it is true that French horn and bassoon are not commonplace instruments in jazz. Attempts have been made to use them, of course, most recently by Julian Schneemann on Roundabout, but in that work, they were used more as colors in the mix.What is unusual is for these instruments to be in the front line and soloing as if to say, “Why not?." This, however is exactly what John Clark and Michael Rabinowitz, both virtuosos on French ...

"And now," as John Cleese used to intone on the Monty Python television series, “for something completely different." In this case, a jazz quintet (+1) sporting a front line of French horn and bassoon and performing, among other things, two horn concertos by Mozart. An odd coupling? At first blush, it would seem so. Far less eccentric, however, once one apprehends the remarkable interplay between John Clark's French horn and Michael Rabinowitz's bassoon, enhanced by Clark's impressive charts and the ...

French hornist John Clark along with his venerable band-mates go straight to the heart with their expressive and altogether grand rendition of Coltrane’s hypnotically melodic, “India”. Bright, rousing horn charts, and fluent phrasing by Clark get things off to a rather rapid and somewhat boisterous start! Here, the pre-eminent french hornist and his fine cast including, drummer Bruce Ditmas, saxophonists Alex Foster, Chris Hunter and others assist Clark in compiling this outstanding production consisting of jazz standards and Clark originals. ...

The French horn is not the first instrument that comes to mind when one thinks of jazz. In modern jazz history, there have been only a handful of musicians -- David Amram, Julius Watkins, Gunther Schuller -- who have achieved any acclaim on the instrument. John Clark is another. A veteran of the progressive big bands of Gil Evans, Carla Bley, and McCoy Tyner, and a current member of the Carnegie Hall Jazz Band, Clark is probably the most in-demand ...