I knew trumpet player Claudio Roditi for many years and although years would pass between encounters, he made a deep impression. I was very moved by his recent death, as were so many in the jazz community. Claudio was Brazilian and a well-known musician in his country, but like a lot of jazz musicians outside America, he wanted to come here and make it in New York. His first port of call, in 1970, was jny: Boston, where ... 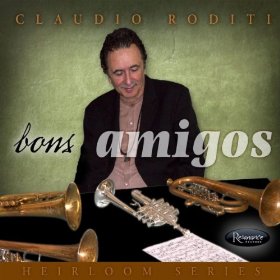 Trumpeter Claudio Roditi may have left Brazil long ago, but his homeland still resides deep inside his soul. On Bons Amigos, Roditi's trumpet speaks, sings and soars in service of songs put to paper by some of the finest writers in Brazilian music history. When it came time to map out a program for this, his third album on Resonance Records, Roditi sat down with producer/label head George Klabin and focused on music, written in the period between the '60s ...

Bons Amigos is a collection of light, breezy compositions from several generations of Brazilian composers. Lilting sambas and gentle bossa novas make up the bulk of this disc, resulting in a relaxed but heartfelt jam for Brazilian trumpeter/flugelhornist Claudio Roditi and friends. Roditi admits to playing “a few more notes" than usual here, though he often equates “playing a lot of notes with 'showing off.'" Yet Roditi's double-time phrases on the brooding “Para Nada" plumb composer Eliane ...

Claudio RoditiSimpaticoResonance2009 Harry SimonThe Mastery of PassionResonance2009 Claudio Roditi, along with Michael Brecker, was a “special guest" on two LPs the young keyboardist Harris Simon made for producer George Klabin at the end of the '70s. Klabin must have liked what he heard in the Brazilian trumpeter/flugelhornist for a couple years ago Roditi did ...

Fresh off his 2009 success with the Grammy-nominated Brazilliance x4 (Resonance), Claudio Roditi has released the stand-out Simpatico. As well as his peerless skills on trumpet, this CD shows off his writing talent with several originals in a samba/bossa groove, as well as some solid straight-ahead tunes.

From the Brazilian jazz tradition, Roditi has established himself as one of today's top players and leaders. His style easily integrates post-bop elements and Brazilian rhythmic concepts. He plays throughout with ...

Claudio Roditi: A Brazilian in Iowa

Watching trumpeter Claudio Roditi lead some unfamiliar sidemen through an afternoon rehearsal prior to an evening performance provided a good look at something not readily apparent at concerts. While the audience at that night's show in Ottumwa, Iowa saw Roditi's talents as a player and improviser (and even singer) displayed, most concertgoers could only have a vague idea of Roditi's abilities as a bandleader. As one observer witnessed, participants in a Roditi-led rehearsal are likely to learn a thing or ... 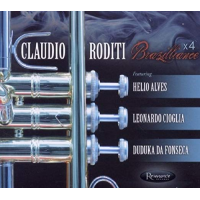 Brazilliance x 4 is only the tenth release from Resonance Records, an arm of the non-profit “Rising Stars Foundation" which aims to showcase new talent. Although trumpeter Claudio Roditi has been well-known and much-loved within the Brazilian music community, he has not been nearly as visible to the general public. His latest is likely to change that, given its collection of sparkling tunes, all delivered with a luscious tropical feel, and at the highest level of musicianship and recording.