In 2020, the superb Howard University Jazz Ensemble from the US capital marked its forty-fifth anniversary. Since its inception in 1975, the ensemble has had only one director, Fred Irby III, its founder and guiding force for lo these many years. One year after organizing the group, Irby assembled its members for a visit to a nearby recording studio, an annual practice that has continued uninterrupted every year since then. Why only one director? Listen to the ensemble's 2019 narrative, ...

One sure sign of spring is the arrival of the latest yearly recording by the superb Howard University Jazz Ensemble, a tradition that dates without pause from the days of vinyl in 1976, one year after the ensemble was formed by its first and only music director, Fred Irby III. For archivists and numbers-crunchers, that's forty-four years and counting. Unlike some of its precursors, HUJE 2018 is entirely instrumental; it does, however, include the usual measure of ...

In 1975, Howard University, a bulwark of higher education in our nation's capital since 1867, formed its first Jazz Ensemble and named a young trumpeter / educator, Fred Irby III, as director. One year later, Irby ushered the ensemble into a recording studio to verify its prowess, a tradition that has continued uninterrupted for forty years. Irby remains at the helm today, and HUJE 2015 is the latest in an ever-expanding catalogue of impressive albums produced by the university's flagship ...

Although the Howard University Jazz Ensemble isn't quite as dependable as a morning sunrise, it has been present and accounted for in a recording studio once each year since it was formed in 1976 by Fred Irby III, who not only directed that first session but has supervised every one since, right up to No. 37, Journey of a Friend, which showcases the 2012 ensemble in a typically engaging album dedicated in part to the memory of former student Dianne ... 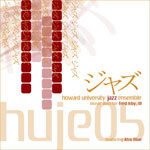 HUJE '05 is certainly no exception to that rule, encompassing nine admirable selections by the ensemble, four more ...

The Howard University Jazz Ensemble from the heart of the nation’s capital continues a long tradition of recording once each year with HUJE ’98, which showcases the ensemble on nine tracks and the eight–member Jazztet on four. Howard has served as a launching pad for such talents as pianist Geri Allen and her trumpet–playing husband, Wallace Roney, and each year director Fred Irby III seems to uncover one or more promising players who appear poised to carry on the tradition. ...