The Brian Setzer Orchestra Christmas Rocks! Extravaganza with the Record Company at the NYCB Theatre at Westbury

The Brian Setzer Orchestra Christmas Rocks! Extravaganza with the Record Company NYCB Theatre at Westbury Westbury, NY November 25, 2014 Brian Setzer must really love Christmastime. The rockabilly guitarslinger has been bringing his annual Holiday Spectacular to the NYCB Theatre at Westbury for a number of years. This show as with all of his Christmas Rocks! performances with his orchestra was an extremely high-energy offering that featured not just holiday classics, but Stray Cats materials ... 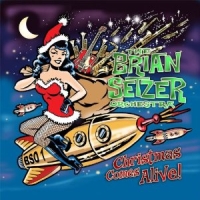