From one of the most powerful drummers in jazz today who is has released a big band album, we start the 717th Episode of Neon Jazz with Ulysses Owens, Jr. and a tune off his latest CD Soul Conversations. As is the case with all Neon Jazz shows, we trace the history of influences for each artist. For Ulysses, he was swayed heavily by Miles Davis and we hear the song “Limbo" from the trumpet master. We also hear from ...

Some jazz drummers, as remarkable as they may be and as successful as their careers are, just aren't suited to drive a big band. It's not for every percussionist. But every big band needs a good one or the effort will fall short. A ship needs a rudder. Ulysses Owens Jr., who started beating out rhythms at home at the age of two, is one of those. His superlative skills have contributed mightily to groups led by Kurt ...

The Musician's Career Guide: Turning Your Talent into Sustained Success

The following is a revised excerpt from “Chapter 16: The Mental Side of Being a Musician of The Musician's Career Guide: Turning Your Talent into Sustained Success (Skyhorse Publishing, 2021). “You cannot have a positive life and a negative mind." --Joyce Meyer, Author, Speaker, and President of Joyce Meyer Ministries We've touched on so many very important areas related to the music business, but we've neglected one that is equally important: mental health. One of the ...

Drummer Ulysses Owens Jr.'s Big Band comes out swinging on its debut recording, Soul Conversations, thundering through Michael Dease's incendiary arrangement of the Dizzy Gillespie/John Lewis flame-thrower, “Two Bass Hit." For more such heat, however, the listener must move forward to Track 5, John Coltrane's impulsive “Giant Steps," thence to Track 9 for Charles Turner III's earnest homage to “Harlem Harlem Harlem," on which he doubles as vocalist. That's not to say that everything in between is ...

Ulysses Owens Jr.The Jazz Corner Songs of Love Hilton Head Island, South CarolinaFebruary 15-16, 2019 It was a pleasure to hear a group of skillful, energetic, and highly-educated young musicians at Hilton Head Island's Jazz Corner, led by master musician and two-time Grammy winner (including one for his work with Christian McBride band) Ulysses Owens Jr.. Bassist Philip Norris recently completed his studies at Juilliard and is now touring around the world, while vibraphonist ...

Justin Varnes / Ulysses Owens Jr. The Jazz Corner Hilton Head Island, SC September 21-22, 2018 The special relationship between jazz drummers and bass players could never have been more obvious than on two consecutive weekends at The Jazz Corner in September 2018. Holding down the rhythm and bass line together, the players don't always receive the exposure they deserve. That omission was resoundingly rectified. On September 21 & 22, drummer Justin Varnes ... 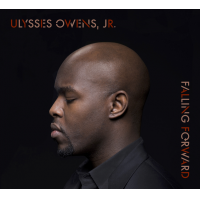 Amidst a successful trajectory as a sought-after drummer with some of the premier jazz bands in the business, Ulysses Owens, Jr. has decided to take a giant step outside his comfort zone with Falling Forward, his fourth venture as leader. In a radical departure from typical jazz ensemble configurations, the assembled group consists of Owens, bassist Reuben Rogers, and vibraphonist Joel Ross, known collectively as Three. The instrumental sparseness is an obvious intent to expand individual contributions, as the triangular ...