There are bands that manage to carve out a place for themselves in the music world that lasts for decades; there are others who, while having created a name for themselves during their peak years and, while they continue to tour and, even, make the occasional studio album, are invariably best remembered for their seminal early years. Wishbone Ash first emerged on the cusp of the 1970s, a time when it seemed anything and everything was possible. While ... 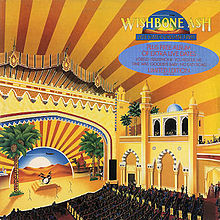 One of the most underrated bands to emerge from Britain in the late 1960s to early 1970s, Wishbone Ash achieved a fine balance between progressive and blues-rock. Its original material made prominent use of tandem lead guitars, mirrored by equally uplifting group harmony singing. These virtues distinguish the sound of the band to this day, as evidenced by comparison between a studio album, Elegant Stealth, and a live recording, Live Dates II, previously available in a variety of formats, but ...

Wishbone Ash was mistakenly lumped in with the boogie bands of the late '60s and early '70s when it first started out, but the group soon developed its own voice--a majestic sound of intertwining guitars and regal vocals, matched by a certain propensity to improvise upon lyrical imagery of knights and warriors that made the group sound like refugees from King Arthur's court with guitars instead of swords.

Not surprisingly, the band's been through more than its share of personnel ...