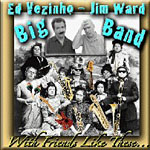 It is a common practice to title an album after one of the pieces composed for and performed on the recording, sometimes attributing a special meaning or theme to the music. Such is the case with saxophonist Ed Vezinho's “With Friends Like These." Alongside trumpeter Jim Ward, Vezinho has co-led the Ed Vezinho-Jim Ward Big Band for twenty-six years with a largely unchanged line-up, providing undeniable testimony that beautiful music can be made when fortunate enough to have “friends like ...

Make room in the satchel; the second album by the spectacular Ed Vezinho/Jim Ward Big Band has at last arrived, and it's definitely earmarked for shipment to that mythical “desert island," along with the ensemble's spine-tingling debut, Smile, which was No. 1 on this reviewer's Top 10 survey of new releases three years ago.

As before, the consistently impressive charts were designed by co-leader/lead alto Vezinho; as before, Ward and split lead Joe Scannella preside over one of the world's ...

It hardly ever fails. Just as one starts to believe that the big–band pool may at last be drying up, a precocious newcomer such as the Ed Vezinho–Jim Ward Big Band suddenly arrives from nowhere to satisfy his / her thirst for mouth–watering big–band Jazz and swat every gloomy notion into the proverbial cocked hat. Well, not literally from nowhere; the V–WBB is actually from New Jersey, and its members are seasoned professionals who perform in casinos and other night ...