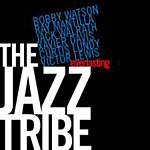 The vogue for Latin jazz began in the 1940s when Dizzy Gillespie hired Cuban percussionist Chano Pozo to play in his big band. At the time, most critics dismissed it as a passing fad. However, percussionist Ray Mantilla, part of a “goodwill ensemble" Gillespie took on a tour of Castro's Cuba in 1977, is today elder statesman of a still thriving genre. With Kansas City saxophonist Bobby Watson, Mantilla fronts The Jazz Tribe, a sextet successfully blending jazz with Cuban ...