Guitarist Assaf Kehati's Naked is, as the title insinuates, an adornment free celebration of melody in a spare and intimate setting. Unlike his two earlier recordings Naked features Kehati without a saxophonist and with a new rhythm duo on an introspective set of his expressive originals and three standards.On the cinematic “The Horses' Fight" for example, Kehati's shimmering lines meander around his sidemen's percolating vamps in an intricate and mellifluous sonic patterns. A mystical sense permeates the music ...

A progressive jazz guitarist with a preference for the electric strings and a light touch, Assaf Kehati unveils his third album Naked since arriving from Israel in 2007 and establishing himself as a modern force to be reckoned with. Kehati offers an album of primarily original music conveying a story behind every piece beginning with the title track that refers to his feelings of being ..."emotionally naked-with no barriers, limits or mask," translating musically into a nine-minute slow burn. Accompanying ...

Guitarist Assaf Kehati has never been one to hide behind the impenetrable or the opaque; his art has always been centered on clarity of thought and communicative expressionism, yet he's reached a new level of musical directness and comprehensibility with Naked. On this, his third release, Kehati winnows away anything that could remotely be thought of as excess. There's still plenty to take in, as Kehati paints and peruses well-conceived canvases with his trio mates, but this ...

Assaf Kehati: Flowers And Other Stories 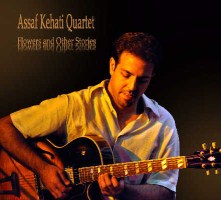 Dynamic tension and release is an under-explored avenue in jazz. While composers and performers of this music seem to come out of institutes of higher learning with advanced harmonic knowledge, allowing them to create stunningly complex chords that resolve in an amiable fashion, these very musicians are often incapable of using the same techniques when dealing with volume concerns. Dynamics, like melody and harmony, play a key part in shaping any musical performance, and guitarist Assaf Kehati is keenly aware ... 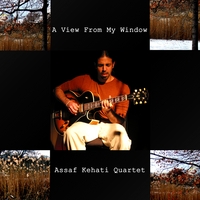 Israeli guitarist Assaf Kehati, Boston-based since 2007, is a regular in drummer Billy Hart's outfits. His melodic compositions are, he says, inspired by the details of daily life. He cites as influences composers who have blurred the distinctions between folk/pop and more sophisticated music--Hector Berlioz, George Gershwin, guitarist Pat Metheny, Sting and even country singer Kenny Rogers. On both of his self-produced releases he is backed by young Israeli players--Alon Farber on sax, Daniel Sapir on bass and Udi Shlomo ...

Assaf Kehati QuartetBlue NoteNew York, New YorkAugust 1, 2010 Guitarist Assaf Kehati brought his enthralling post-modern, Middle Eastern-tinged music to an appreciative though occasionally chatty, crowd during Sunday jazz brunch at New York's Blue Note. Kehati's education--with undergraduate studies at the Rimon School of Jazz and Contemporary Music in his native Israel and a masters degree in jazz performance from the New England Conservatory of Music--is reflected in his music and he leads with ...

In recent years, the guitar trio--with bass and drums--has reached mythic status. Once an obscure instrumentation, the setting has been elevated to new heights by young guitarists seeking the kind of interplay for which the piano trio is so lauded--the very interplay so written about that it has become a cliché to even mention. After all, who has not read ...