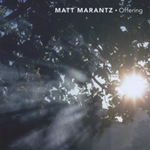 Saxophonist Matt Marantz's Offering is a splendid debut; echoing, in part, the lyricism and verve of three of his influences--Charlie Parker, Cannonball Adderley, and Phil Woods. It's interesting to note that the young New Orleans based saxophonist is a tenorist--whose intrepid lines and phrasings are honed from practice and performance--with an alto-like tonality that is less throaty than players such as Chris Potter, and purposed with its own individuality. Proving himself to be an astute writer on ...