Pablo Ziegler Latin Jazz Trio Sha Tin Town Hall, Hong Kong October 16, 2018 There's a tightly wound ball of contradictions at the heart of Astor Piazzolla's “nuevo tango" revolution, which injected the common man's South American dance music with classical sophistication and jazz-influenced harmony, literally taking tango from the dancehalls to concert halls, elevating its association from brothels to academia. The quest continues in the Argentinian composer's survivors, of which the ... 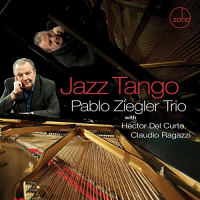 Jazz Tango--winner of the 2018 Grammy for “Best Latin Jazz Album"--is a distillation of pianist Pablo Ziegler's vision. Leading a trio of American-based Argentinians, Ziegler delivers a program that perfectly encapsulates the titular hybridized form that he knows so well. This exhilarating outing opens on Nuevo Tango patriarch Astor Piazzolla's “Michelangelo 70," a number simultaneously referencing a famed Buenos Aires tango club and the composer's year of departure for Europe. With some chromatic zest and loads of ... 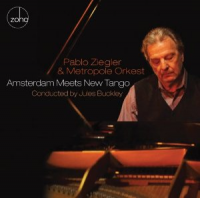 Astor Piazzolla invited jazz into the world of tango, birthing a hybridized form of music that's outlived its creator; jazz, proving equally hospitable, opened its doors to Piazzolla and nuevo tango. High-end artists like saxophonist Gerry Mulligan, vibraphonist Gary Burton, and guitarist Al Di Meola all collaborated with the legendary composer/bandoneon player, helping to raise his profile and that of nuevo tango music on the whole. Piazzolla had a notable influence on, in addition to all three of these musicians, ... 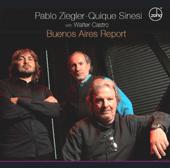 The music was recorded over two shows at the Bimhuis in Amsterdam. Nine tunes were selected from the sixteen that made up the night. The choice is judicious, ...

To hear the delightful sounds of Argentinean tango/jazz pianist, Pablo Ziegler and his trio on Buenos Aires Report is to allow oneself the indulgence of being transported to strolling the streets of Buenos Aires or to be swept into a scene of casual open-air dining at a late night café in Paris. The music is a sensuous combination of tango-inspired melodies with elements of classical music, jazz improvisational techniques and a sprinkling of gypsy bravado. This is definitely ... 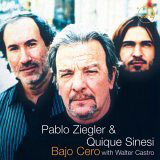 Bajo Cero continues the string of fine releases from the folks at New York's Zoho Music, this time presenting an excellent example of tango nuevo in a trio format. Playing a combination of tango and jazz styles with roots in Argentina, the triumvirate is led by Pablo Ziegler, a graduate of the Buenos Aires Music Conservatory and Astor Piazzolla's pianist for ten years. He has been a featured symphonic performer and composer across the globe, as well as having associations ...