The Jazz in Britain label has made its reputation with a niche catalogue of previously unavailable archive albums, mostly recorded live back in the day by jazz greats such as the saxophonists Tubby Hayes and Joe Harriott. With the lovely Ken Wheeler: Some Gnu Ones, the label ventures more or less into the present day with three pieces written by the late trumpeter Kenny Wheeler and recorded in 2020 and 2021 by the bassist Chris Laurence, for whom they were ...

John Surman, Chris Laurence & Trans4mation Quartet Kings Place London Jazz Festival November 14, 2014 The first Friday of this year's London Jazz festival saw John Surman celebrating his seventieth birthday at Kings Place near King's Cross Station. The venue is about as far as it could get from anyone's idea of the smoky dives so readily associated with jazz. It's calm and relaxed, comfortable and, well, polite--in a good way--and most definitely smoke-free. ... 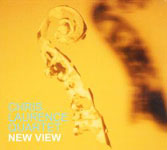 New View is Laurence's long-overdue debut as a ...