Seven is as Seven Does

This episode is a seventh anniversary celebration featuring--you guessed it--septets. Also featuring copper, sheep, speculation about the role a great title has in creating a jazz classic, and all sorts of other goodies. Unwrap, enjoy, and stay tuned for pop matters where Mike strays productively off-course to give an in-depth review of an eye-opening David Binney concert. Playlist Discussion of The Fat Babies' album 18th and Racine (Delmark) 5:20 Discussion of Mulgrew Miller's album Hand in Hand ...

Ben Allison, Ron Horton and Frank Kimbrough have been collaborating for more than a quarter century, including as members of the influential Jazz Composers Collective. During these years they have established themselves as stalwarts of the New York jazz scene and developed their own instantly identifiable sounds, solidifying their international reputations as leading voices of their generation. This mixtape includes highlights of their extensive discographies, from their collaboration in the seminal Herbie Nichols Project, through countless ...

Bass Is the Place!

Where do rhythm and harmony intersect? Where do you feel the beat, not just with your ears but your whole body? Bass is the place where it all comes together. This week we celebrate some beloved jazz bass players, from riveting soloists to groundbreaking composers and consummate sidemen. Ben Allison “Mondo Jazz Theme (feat. Ted Nash & Pyeng Threadgill)" 0:00 Jaco Pastorius “Donna Lee" from Jaco Pastorius (Epic) 0:07 Host talks 2:44 Charles Mingus “Haitian Fight Song" ...

Ben Allison: Between Groove and Melody

Bassist, bandleader, educator and composer, Ben Allison is one of the leading players of the world stage. During the past twenty years he has released twelve records and led various bands, performed on more than thirty albums, co-founded The Jazz Composers Collective, and served as its Artistic Director until its dissolution in 2005. In this conversation, Allison speaks about his album (Layers of The City, Sonic Camera Records 2017), his personal style, the birth of his own label, his long ...

Conservatory-educated jazz musicians often follow a similar developmental path as they mature, typically expanding the relatively narrow focus of their academic training to reexamine the non-jazz related music styles that initially inspired them. Take the young lions of the pre-millennial era for example; most have extended their purview beyond straight-ahead hard bop to incorporate aspects of the funk, r&b and soul music they grew up with. The same paradigm exists for their avant-garde counterparts, whose demographic is generally raised on ... 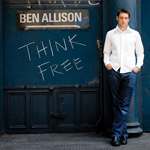 Gradually moving away from the chamber music-like aesthetic of his Medicine Wheel and Peace Pipe ensembles of the nineties, bassist Ben Allison has begun embracing his formative influences, leaning towards a slightly more rock-oriented sound. Think Free is his third Palmetto album in as many years, thematically following Little Things Run the World (2008) and Cowboy Justice (2006). Looking beyond traditional jazz for inspiration, Allison weaves bittersweet pop melodies, folksy Americana, and subtle rock music flourishes into an evocative sonic ... 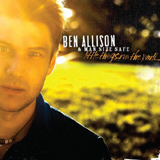 On his eighth album, Little Things Run The World, bassist/composer Ben Allison delves further into the cinematic Americana explored on his previous release, Cowboy Justice (Palmetto, 2007). Inspired by a quote from biodiversity expert E.O. Wilson, the album features a selection of multi-layered tunes that rely on structural interdependency as much as the social organisms Wilson studied. Naming the ensemble Man Size Safe, after a news item about the ominous item located in the office of Vice President ...