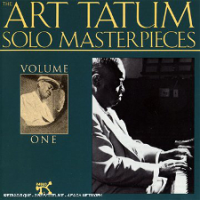 If blues icon Robert Johnson is a phantom, then pianist Art Tatum is a myth. In spite of James Lester's 1995 biography Too Marvelous For Words: The Life and Genius of Art Tatum (Oxford University Press, 1995), little is known of Tatum, whose piano talent has yet to be equaled more than fifty years after his death. It is acknowledged by more than one authority that Tatum was the greatest jazz pianist to play. But Tatum was marginalized for most of his life. Tad Hershorn, in his new liner notes to this remastering, cites Norman Granz as saying, "Curiously enough, he found it very difficult to find work. I used to see him in terrible clubs in Hollywood, with people at the bar making noise. I know he thought the world had not recognised him and passed him by."

This account betrays a possible myopia on the part of Granz, who fails to acknowledge the obvious, that Tatum was an African-American man living in Jim Crow America. As far as noisy bars are concerned, there exists plenty of audience commotion on Oscar Peterson's The Trio. A noisy bar is the rule, not the exception. Hershorn follows another line of reasoning put forth by writer Terry Teachout, who opined that Tatum's lack of recognition may derive from Tatum's committing the cardinal sin of virtuosity, "making it look too easy, Tatum's calm 'deprives us of that slightly sadistic thrill' that draws crowds."

Teachout may be overthinking things, but is definitely onto something regarding Tatum's virtuosity. Technical ability alone makes more for boredom than understanding and enjoyment. There are dozens of rock lead guitar players left in the wake of their commercial demise by the Grunge Rock movement of the 1980s and '90s whose technique is well beyond compare who lack more popular acclaim because of the sterility of their performance, e.g., Joe Satriani and Steve Vai. So much of Tatum's work is just too much...too many notes, too much virtuosity, too much technique. These attributes undoubtedly appeal to the musician, that small community studied enough to recognise Tatum's sheer genius. But the average listener—whoever that is anymore—stand to be less impressed or interested. For our current Ritalin-failed society, Tatum just required too much attention.

That said, Tatum exists with a fixed creative corpus to contend with and the Solo Masterpieces, Volume One remains a fine place to start. It is presented here as a remaster celebrating the 40th anniversary of Pablo Records. Norman Granz recorded Tatum in a solo setting between 1953 and 1955, a year before Tatum's death from kidney failure. The selections appearing on Volume One were programmed from throughout this period. Tatum always credited Fats Waller as being his greatest influence and listening to the third chorus of "Love For Sale" it is easy to see why, with Tatum's left hand hitting stride. His performances often were microcosms of multiple styles and style signatures, "Willow Weep For Me" being a grand example.

No Tatum blues performances are programmed on Volume One. Instead, greater attention is payed to his American Songbook interpretations. Tatum was uncanny in his ability of reharmonize on the spot, something made perfectly clear on "Love For Sale" and "Embraceable You." "Too Marvelous For Words" contains this same reharmonization coupled with Tatum's sure grasp on altering time signatures and performance styles. Tatum's command is so certain and his musical experience so expansive, that he, like the best jazz musicians, needn't perform a given piece the same way twice, making for a universe of performances to compare, contrast, and enjoy. Too wordy? Perhaps. Too much music? Perhaps. But, no one could play piano like that.

Tracks: Moonglow; Love For Sale; Body And Soul; Just A-Sittin' And A- Rockin'; It's Only A Paper Moon; Have You Met Miss Jones; Stay As Sweet As You Are; My Last Affair; Willow Weep For Me; Too Marvelous For Words; You Took Advantage of Me; Sophisticated Lady; I'm In The Mood For Love; Everything I Have Is Yours; Blue Lou; Embraceable You.