By GLENN ASTARITA
October 31, 2014
Sign in to view read count 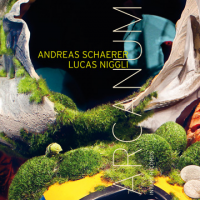 Whether leading his Drum Quartet, seven-piece Zoom ensemble or supporting fabled improvisers, bassist Barry Guy and guitarist Fred Frith, Swiss drummer Lucas Niggli is not one to play it safe or dodge risk-taking processes. His mantra is firmly implanted in a musical world that is assuredly outside the box, after appearing on nearly two-dozen albums for Intakt Records. On Arcanum, Niggli takes another leap of faith by teaming with free-form vocalist Andreas Schaerer. Besides the drummer's colossal sound and enviable technique, the twosome sparks esoteric dialogues, perhaps signaling tribal music for the modern era with an air of antiquity, especially during the vocalist's sanctified chants and perceptive use of electronics effects. Niggli and Schaerer often operate at warp speed or temper the proceedings when exploring dimly lit panoramas.

The duo executes some trickery with mind-bending, polyrhythmic unison runs. At times Schaerer conjures imagery of Brit avant vocalist Phil Minton's cavorting, alien-speak atop Niggli's thunderous tom rolls and swooshing cymbals hits. Yet the title track "Arcanum," is nestled within a spooky and harrowing environ, emphasized by the drummer's intermittent cymbals crashes, as they shift gears on "Chasing The Frog," by implementing a slap, dab, and popping rhythmic escapade, intensified by Shaerer's maniacal scat refrains. However, the musicians do fuse some warmhearted opuses into the program. And they embed textural components via highs, lows and polytonal treatments but also produce outlandish soundscapes that trigger seething discourses. It's an inviting concept with bouts of fun and frolic amid a journey that can rattle your brain, soothe the savage beast or even freak out your friends.