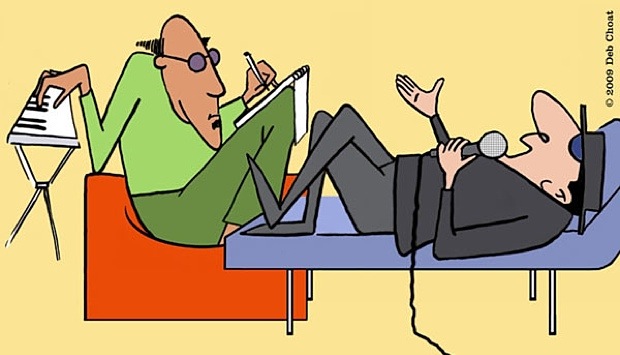 A friend of mine books a successful outdoor music series featuring crowd-pleasing groups like rock cover bands. He called me up and told me that there was a problem: crowds had grown too large, forcing the city to hire extra police and trash collectors. Because of the city's budget crisis, he was under pressure to book bands that would draw smaller crowds. Then he offered my jazz trio a date in the series.

How should we dress for the gig? Kirk, New York

Dear Kirk: I totally understand your dilemma. Since the crowd is used to rock bands, they probably expect your trio to wear spandex body suits with plunging chest lines and cucumber-stuffed crotches. But that would objectify you as mere sex objects—albeit middle-aged, saggy ones—and detract from the profundity of your art.

On the other hand, if you were to dress in the more high-toned attire of intimate jazz clubs and cocktail lounges, all the nuances—matching patterned bowtie and cummerbund, polished cufflinks, ruffled shirts—would be lost in the physical distance between you and the audience.

But these may be moot points. Given all the challenges they're having with their budget and trash collection, don't you think they'll expect you to help clean up the garbage after your performance? Well, there's your answer! Build your wardrobe from the bottom up, starting with understated yellow galoshes, and then adding brown stain-resistant pants and matching wrinkle-free brown shirts. From there, accessorize freely—you're improvisers, after all! Just as in jazz, there's plenty of room for individuality: Latex gloves, rubber coveralls and safety goggles are all fair game; go with what you feel, and you won't go wrong.

With that winning look, be sure not to swing too hard, or your friend may find that his audience gets even bigger! Then you'd be faced with a tough choice: losing the gig, or spending more time on garbage duty than on stage.

What an interesting and thoughtful solicitation! I'm happy to help—I'll follow your suggestion by not listening to your music, and I'll pass it along so all my friends can also choose not to listen to it, and their friends will do the same.... The number of people willfully ignoring your music will grow exponentially until it finally reaches its mathematical conclusion, at which point you'll have successfully warned all of civilization, so that absolutely no one will listen!

I assume your music is awful, and your letter is a humanitarian gesture to protect us all from it. I hope you'll serve as a model for other people who make bad music throughout the planet, so that humans of every creed and color will eventually be spared all toxic listening experiences.

Thank you so much! It's really quite brilliant—it's just like a pyramid scheme, except there's no reward for anyone, and instead of being positive, it's totally negative!

Last night I saw the pianist and bassist talking to each other in the middle of my song. There was a lot of eye-rolling going on, which makes me wonder about these guys. I mean, they get to play the whole night while singers like me only get one shot on stage (if we're lucky.) Don't you think they could flirt somewhere else? Candace P.S. I love your column. It says so much about me.

Just out of curiosity, what exactly does my column say about you when I discuss, for example, cannibalism, prescription drug abuse, and auto-fertilizing hermaphrodites? You must have a fascinating bio, but I pity the hapless song you commandeer as a vehicle for your life experiences.

Anyway, to your question: Have you ever seen a movie where a protagonist, in the climactic moment, rolls his or her eyes back into his or her head? It can happen just prior to fainting, or at the onset of death, or in the throes of sexual ecstasy.

Well, when your pianist and bassist roll their eyes together, they're not about to faint or die, so where does that leave them? It's a story usually left untold, but apparently you need to know: Having inspired one another to the loftiest of shared heights, they're conjoined in a manner that—were it not for bandstand taboos—begs to be consummated sexually.

That they can reach these heights while backing you should be the greatest of compliments, if only you were open to it. The freewheeling, exotic life story that is your song has helped them get in touch with their own unspoken desires. That they restrict you to "one shot" is typical of male sexuality, and you shouldn't be surprised if they fall asleep shortly after the tune ends.

Accompanying 101, For Your Consideration, Bandstand Violence