By Troy Collins
November 2, 2010
Sign in to view read count 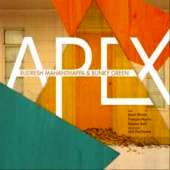 A rising star, Mahanthappa's partiality for intricate structures based on mathematical and linguistic concepts has occasionally resulted in his work being labeled overly cerebral, though his burgeoning interest in South Indian Karnatic music has won him great acclaim in recent years. A formative influence from Mahanthappa's student days, Green has spent the past few decades in relative obscurity, his brief tenure as a sideman to Charles Mingus superseded by his academic role as a life-long jazz educator. Green's biting tone and angular phrasing has long inspired the M-Base crowd (including Mahanthappa), making this auspicious meeting a triumph of serendipity.

The conceptual heart of the recording lies in Mahanthappa and Green's vivacious discourse, their sinuous cadences sharing an aesthetic approach that transcends the nearly four decades that separate them. Possessing a similarly tart timbre and harmonically sophisticated sensibility, they trade brisk, virtuosic salvos with corresponding stamina, belying their age difference. The appropriately titled "Summit" and the dramatic closer "The Journey" are epic meditations on the possibilities of a dual alto front-line, featuring some of the date's most impassioned exchanges. The jubilant funk of "Playing with Stones" and serpentine modality of "Eastern Echoes" borrow liberally from Mahanthappa's interest in the music of his heritage—the later finds Green revisiting the Eastern tonalities he gleaned studying Algerian street musicians in the 1960s. The bristling abstraction "Who?," the most oblique and adventurous offering of the set, spotlights the altoists' coiled contributions alongside Moran and Reid's cascading volleys.

The quintet's gentle side is unveiled on ballad fare like "Little Girl, I'll Miss You" and "Rainer and Theresia," flush with sensitive lyrical interpolations unrestricted to the co-leaders. The melancholy "Lamenting" spotlights Moran's pellucid touch, and Moutin's effervescent solo on "Little Girl, I'll Miss You" demonstrates his harmonic sensitivity—in contrast to his forceful pizzicato, revealed on the brief but frantic staccato climax of the languid blues, "Soft."

Far more than a mere blowing session, Mahanthappa and Green split writing duties on these new pieces, balancing complex contrapuntal structures with accessible mainstream traditions. Supported by a crack rhythm section, their harmonious rapport surpasses generational differences with a unified devotion to the visceral thrill of unfettered swing. A long overdue recognition of Bunky Green's timeless artistry, Apex is an impressive summit meeting and one of the year's most exciting albums.