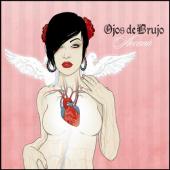 While for most people outside Spain, life with Ojos de Brujo began in 2004 with baritone (World Village), or later with Techari (Six Degrees, 2006), the Barcelona-based, Catalan and Gypsy collective has been together since the late 1990s, and released its first album, Vengue (Edel), in 1999. In all this time, the band has stayed true to its original vision: an intoxicating rainbow of flamenco, rumba, jazz, rap, reggae and funk, topped with anti-establishment, libertarian lyrics written in the main by the mesmerising singer and rapper, Marina Abad.

On Aocana—in the Gypsy language Calo meaning "now," and used here as an abbreviation of aocana garlochi ("now with the heart")—Ojos de Brujo ("eyes of the wizard") present more of these trademark cross-cultural mash ups alongside a clutch of finely wrought and exquisitely pretty ballads and romances, balancing turbulence with new degrees of tenderness. It's a winning combination.

For Techari, in a departure from previous practice, the band's core octet was augmented by a rolling cast of a dozen or so guest musicians. That template is repeated with Aocana, which includes 24 guest singers and instrumentalists in addition to Cuban quintet Los Van Van and drummers from India's Karnataka College of Percussion. Chaos is avoided by the sparing application of this caravan. Los Van Van and Cuban pianist Roberto Carcasses, for instance, are heard only on "Busca Lo Bueno" ("seek out the good"), an abandoned 5/4 rumba, and the Karnataka drummers only on the Indo-flamenco celebration "Tantas Flores" ("so many flowers"). Trumpeter Carlitos Sarduy, of the band's core octet, is joined by more horns on six of the dozen tracks.

Compared with Techari, and more particularly, with the near-to-overload sensory impact of Techari Live (Six Degrees, 2007) and its accompanying concert performance DVD, Aocana is a more deftly nuanced affair—lyrical and intimate to begin with, but steadily building in intensity before the final chill-out. The rousing, exuberant opener "Todos Mortales" ("mortals all") is followed by three more moderately pitched tunes, and the nimble rap "Donde Te Has Metio" ("where have you got to"), showcasing Abad and the twin flamenco guitars of Ramon Gimenez and Paco Lomena. Track two, "Nueva Vida" ("new life"), Abad's love song to her newborn baby, is particularly lovely. Taken out by Sarduy's poised and cool, post-electric Miles Davis, muted horn, it sets the tone for the quieter tunes on the album.

The band don't cut loose bigtime until track six, "Una Verdad Incomoda" ("an inconvenient truth"), a terrific tango, rap and dancehall fusion addressing a range of nasty events from the Balkans to Guantanamo. The tune will be a monster live. It's followed by "Baraka," a bittersweet slice of life which, like the penultimate "Perico Y Juliana," puts a human face on the anonymous underclass of migrant workers; the ravishing flamenco "Tocale Ya" ("play to her now"), both within and beyond the tradition; "Busca Lo Bueno," giddy and lurching, given a roots Cuban ambiance by Los Van Van's strings; and "Tanta Flores," an Indo-flamenco revel which, onstage and extended, promises to be as thrilling as "Todo Tiende" on Techari Live (check the YouTube clip below, and hang on in there for 2:30 until the women start singing). The album closes with the chilled-out "Lluvia" ("rain"), on which Sarduy's muted trumpet delights again.

Live performance is the sine qua non of Ojos de Brujo, and the group's 2009 concerts, and the live CD and accompanying DVD which are likely to follow Aocana, should be bliss. Meanwhile, this superbly crafted studio set is a jewel. Ole, Ojos de Brujo!