Maximize your visibility at All About Jazz by upgrading your musician page from standard to premium. With it, you'll receive All About Jazz home page exposure, a highly stylized / ad-free musician page with bonus features and benefits, an ad, plus you control where you sell your music and so much more.
Learn More
566 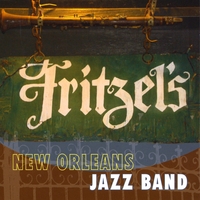 With all of its noise and fraternity-like atmosphere, there still remains a little slice of jazz heaven on Bourbon Street in New Orleans. Fritzel's European Jazz Pub is one of city's premiere clubs featuring traditional jazz seven nights a week. It is small, intimate and usually lined with local and international jazz fans who have come to the 700 block of Bourbon Street to hear the music they love. The music is upbeat, the cheering is raucous, and it would be hard to spend an evening in the club and not have a great time.

So it's good news that Fritzel's has released a studio-recorded CD featuring some of the top musicians who perform at the club. And like Fritzel's itself, this CD can best be described as a "great time". Fritzel's New Orleans Jazz Band consists of 15 favorite New Orleans club tunes played with the exuberance and sense of fun to be expected at a great New Orleans jazz venue. This is foot stomping, head bopping music that exudes joy: be aware that it may cause outbreaks of unpremeditated dancing.

The album's tone is set by the steady drum beat and bass lines of Brian Bess and Bradford Truby, who infuse it with a continuous swinging rhythm. Both Bess and Truby have admirable solos throughout the album. "Blues My Naughty Sweetie Gives To Me" features fast paced solos by Richard Scott on piano, Barry Foulon on banjo and Tom Fischer on clarinet. Fischer's last wailing note on his solo calls all instruments into play and leads into a jazz frenzy that Fritzel's is known for in the live performances. One can almost hear the screaming applause as the last note is played. This frenzy is repeated in other fast paced tunes, including "Fidgety Feet," which finds Fischer and cornet player Chuck Brackman playing perfectly against each other, "That's A Plenty," with Truby moving fast on his bass line, and "Bogalusa Strut," with its catchy chorus line sung by the band.

Truby, as producer, understands the importance of slowing down for a few tunes so as to allow the listener to catch a breath. Following Brackman and Fischer's soulful cornet and clarinet duo introduction on "Do You Know What It Means to Miss New Orleans," Foulon's beautiful banjo and Brackman's raspy voice reminds all what a great city New Orleans really is and how the city has lent itself to the development of jazz. Scott's enchanting choice of chords during his piano solo provides a suitable moment for the listener to close his or her eyes and imagine the moonlight on the bayou and the Creole tunes that fill the air. This leads into Fischer's gentle clarinet solo, one that really will make listeners wish they were there. In addition, "St. James Infirmary" and "Up a Lazy River" are perfectly positioned to give pause from the fervor.

Of course, this CD would not be complete without a rendition of "When The Saints Go Marching In." This version does not disappoint, with each member of the band taking a rousing solo. This is a tune that might best be listened to whilst second lining with an umbrella in hand.

The album ends, as one might expect, on an upnote with the song "Swing That Music," which features all musicians, but especially showcases Scott's great ability for stride piano and an exciting riff by Brackman. This is a CD that grabs the listener from the beginning and holds your enthusiasm until the final note.

If this was Fritzel's attempt to produce a disc that allows patrons to take a little bit of the club home with them, they have succeeded greatly. This is an enjoyable hour-and-ten minutes that fully expresses the joy of traditional New Orleans jazz straight from Bourbon Street. The only way to get closer to this music is to go to New Orleans and sit up front at Frtizel's. And that's not a bad idea either.