Randi Cee: Any Kind Of Man

BY BUDD KOPMAN
September 15, 2015
Sign in to view read count 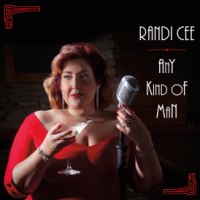 Singer and all-around showbiz personality Randi Cee is a real deal throwback to the days when Tin Pan Alley and jazz intersected and produced the music that had high musical content as well high entertainment value. The nightclubs, Broadway musical and 78s were the soundtrack to the 1920s and 1930s and, to this day, this music evokes the Roaring Twenties as well as undercurrent of hope during the Great Depression.

Any Kind Of Man is Cee's debut EP and her voice and delivery just jump out of the speakers, plus her backing band can swing the paint off the walls. She would be perfectly at home fronting Joe Smith and The Spicy Pickles since both she and they perform music that is at its core completely honest with directness and deep feeling for what it is about.

The word "sassy" hardly describes Cee as she struts her stuff on Victoria Spivey's "Any Kind Of Man," or works "Bei Meir Bistu Shein" for all its worth. "After You've Gone" is delivered kind of straight, but then the band kicks into high gear and just tears it up a la Django.

"Bye Bye Blackbird" is still a very familiar tune and Cee really gets inside of it, so much that any audience listening to her show will almost have to sing along; the band is also spot on with a big broad swinging beat.

Cee gets into the risque undertones of "You Made Me Love You (I Didn't Want To Do It)" and makes it work, as does the band.

The arrangements are just about perfect, her voice and demeanor ooze the era, and anyone who has slightest interest in early jazz should check out Randi Cee!

Any Kind Of Man; Bei Meir Bistu Shein; After You've Gone; Bye Bye Blackbird; You Made Me Love You (I Didn't Want To Do It).