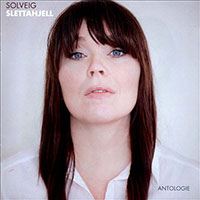 It's been two years since Solveig Slettajhell's Tarpan Seasons (Universal Music Norway, 2010), and in the intervening years she's been a little busier than usual, taking time off to give birth to her first child. Delivering a thoroughly captivating duo showcase with In The Country keyboardist Morten Qvenild at this year's Jazzahead! in Bremen, Germany—playing music largely culled from Antologie—it was clear, however, that family responsibilities haven't stopped the Norwegian singer from further stretching the concept she's been honing in the decade since Slow Motion Orchestra (Curling Legs, 2001).

Slettahjell's constant companion—appearing on every recording except Domestic Songs (ACT, 2008) and, more often than not, on tour as well—Qvenild has long proven an ideal fit for the singer's foundational premise: taking music from a wealth of sources—Disney show tunes; jazz standards by Cole Porter, Lee Morgan and Nina Simone; contemporary fare from singer/songwriters Joni Mitchell, Tom Waits and John Hiatt; and, increasingly, original material—and playing it slow...really, really slow. But suggestions of kitsch or shtick have long been laid to rest, with Slettahjell's voice proving capable of twisting and turning the music with rare intuition; undeniably capable of broader melisma, power and range, but applying them so sparingly—so judiciously—as to create some surprisingly dramatic turns with the subtlest of gestures.

Recent recordings have focused on original material, but Antologie returns to Slettahjell's roots. In the liners, she claims to see herself as "a singer first and songwriter second" and, while her recent discography would suggest otherwise, the almost all-cover Antologie certainly makes a strong but eclectic case for the singer's self-assessment. Slettahjell delivers soft and largely down tempo versions of material from some familiar suspects—Nick Drake's "Fly," Leonard Cohen's "Famous Blue Raincoat," Annie Lennox's "Saddest Song I've Got..." even the The Rolling Stones' "Wild Horses," here turned into a brooding ballad—all supported by Qvenild's organic blend of piano (prepared and otherwise), synth and effects, something he is now pursuing academically, in a PhD program, calling it "hyperpiano."

With all the down tempos and soft textures, "Crazy" comes out of left field as Antologie's most vibrant, potent and portentous tune, despite being taken at a clip significantly below Neo-Soulster Gnarls Barkley's original from St. Elsewhere (Atlantic, 2006). Still, this set-closer for Slettahjell and Qvenild's Jazzahead! performance demonstrates both players' capacity for greater extremes. If Waits' "Take It With Me" and the unlisted (and presumably original) "After Hours"—both featuring Slettahjell alone, this time accompanying herself on piano—close the album much as it began, there remains more than enough evidence that Slettahjell and Qvenild could go in a different direction, should the spirit move them.

Wild Horses; There There; Fly; Famous Blue Raincoat; Okay; Peeling Off the Layers; The Winner Takes It All; Saddest Song I've Got; Jenny Wren; True Colors; Crazy; Take It With Me.