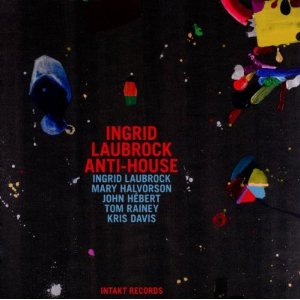 Her music has grown exponentially in the intervening years, but there are passages on saxophonist Ingrid Laubrock's Anti-House which resonate strongly with her 2004 album, Forensic (F-IRE), the disc which announced her emergence as a soloist and bandleader of propitious substance and originality. The connection is the beat. Until now, Laubrock's post-Forensic albums, notably Sleepthief (Intakt, 2008) and Paradoxical Frog (Clean Feed, 2010), have found her more involved with sonic experimentation on her horns, and in-the-moment micro-interaction with her fellow musicians, than with the loved up, serpentine grooves and ostinatos she engaged in with bassist Larry Bartley and drummer Tom Skinner on Forensic—and perhaps even more memorably when playing the album's book live, with Sebastian Rochford in the drum chair.

The grooves on Anti-House are more splintered, fleeting and occasional, and move towards the abstract more readily, than in 2004, but they provide similarly engaging departure points for Laubrock's off-planet explorations. "Slowfish Glowfish," "Quick Draw," "Anti-House," "Betterboon" and "Tom Can't Sleep" each have both feet off the ground, but even as they spiral higher, they periodically return to riff-like beats and melodic motifs. Laubrock can drive a motor rhythm with fissile enthusiasm, honking and squealing like an old-time, bar-walking tenor player while keeping the direction out and future facing, and it's great to hear her referencing that R&B-informed heat again.

The new band is the most visceral Laubrock has assembled since Forensic. Brooklyn's emergent guitar star Mary Halvorson—whose Saturn Sings (Firehouse Records) was also released in September 2010—is her perfect foil, switching deftly between fluid, crystalline, extended single-note passages and raunchy post-Jimi Hendrix chord work. Less concerned with sonic innovation than Laubrock, Halvorson's mastery of pitch distortion brings an added dimension to the music; listen to her solo on "Quick Draw" and be entranced. Bassist John Hébert, also heard on Saturn Sings, and drummer Tom Rainey, heard on both Sleepthief and Paradoxical Frog, are subtle and understated, or champions of the beat, as the shape of each tune evolves. Pianist Kris Davis, another Paradoxical Frog graduate, guests memorably on the title track.

Shot through Anti-House, of course, is Laubrock's ongoing fascination with fresh saxophone sonorities—no longer the "experiments" they were even as recently as on Sleepthief, but now nailed, on-demand additions to her repertoire. Few saxophonists possess Laubrock's encyclopaedic vocabulary, and even fewer can move around in it with such ease or such eloquence.

Anti-House is Laubrock's most all-round satisfying album to date, a cascade of gritty beauty, some of it quite savage, which harnesses the enduring appeal of Forensic to the discoveries that have followed it.