BY DAN MCCLENAGHAN
November 12, 2005
Sign in to view read count 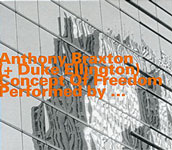 This very free set seems like a bait and switch. Bold orange print on the grey cover proclaims Anthony Braxton (+ Duke Ellington) Concepts of Freedom. But this is not a Braxton CD; you have to check the fine print of the back of the cover to find out it's trombonist Roland Dahinden leading a quartet into "...a musical reality through the compositional impetus of Braxton and Ellington," according to Art Lange.

I don't know about that. This sounds more like modern European classical/free improvisation to these ears—Braxton, maybe, but if there's a hint of Ellington, it escapes me. So take the disc on its own terms. The opener mish-mashes trombone groans and flutters in with the sharp sting of vehemently-bowed violin, with precise piano punctuation—sometimes plentiful, sometimes spare—into a foray of barely tethered sonic rambles. The second cut is more measured, with a very modern classical feel, sounding relatively mapped-out, composed in a lugubrious tempo—oddly beautiful, if you're willing to give it a chance. I don't detect any "electronic"; the piano, trombone and violin trade space, shifting in and out of each other's sound. On the next tune—the listing, exactly what is what, is unclear—I do hear the "electronic," a grainy wash that blinks out shortly, giving way to some free piano improvisation, a frantic, spontaneous finger dance along the keys, full of sharp edges and unexpected angles.

Roland Dahinden's trombone work is always interesting, with squawks and groans and leviathan grunts, and the first five cuts here stand up to repeated spins, for those who delve into the free improvisation/modern classical sound. The last two cuts, with background washes of featureless electronic noise, are a difficult listening experience.

Visit Roland Dahinden on the web.