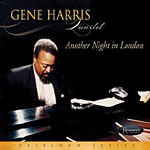 Pianist Eric Reed once described Gene Harris (1933-2000) thusly, "Gene Harris = Power!" Harris often described himself as "a blues pianist with chops." And what chops those were. In his nearly 50- year career, Harris never veered from his soulful, blues-oriented approach to making music. If Bill Evans could be considered a master of the jazz ballad, then Harris was his counterpart in the sturdy 12-bar jazz mainstay. If music can smile, Gene Harris' would beam.

In 2008 Resonance Records released Live in London, a disc capturing Harris' spring 1996 concert at London's Pizza Express with a local rhythm section. This release was derived from private tapes held by Harris' widow, Janie Harris, and is the only available release of Harris with this British quartet. Another Night in London includes six more lengthy pieces from the same show.

Harris was known for giving pieces a complete workout in performance and the six included here are no exception. The shortest, Alan Brandt and Bob Haymes' "That's All," clocks in at just over eight minutes. The longest is a frenetically and orchestrally introduced 13-minute "Georgia On My Mind," that rocks as effectively as his famous performance of "Summertime" on Ray Brown's Bam, Bam, Bam (Concord, 1988).

The disc opens with the Harris mainstay, "Sweet Georgia Brown," piquantly arranged and brimming with blues rhetoric and smoldering church fire. Harris solos two-handed with the band at full tilt, followed by guitarist Jim Mullen cramming his solo full of quotes; dig that "Bewitched, Bothered, and Bewildered" citation. Leon Russell wrote "This Masquerade" to be a jazz standard, giving George Benson a potent vehicle for his hip guitar and hipper vocals. Harris and Mullens translate this to the piano-guitar quartet seamlessly, demonstrating, in the meantime, Harris' grand command of dynamics.

Harris is a woefully underrated performer whose entire recorded library is excellent. These sides recorded four years prior to his death show Harris in complete command and provide a good starting place for those interested in blues- based jazz.

Sweet Georgia Brown; Meditation; That's All; Lady Be Good; This Masquerade; Georgia on My Mind.