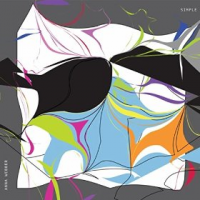 Simple (Skirl 2014) , New York based composer/saxophonist Anna Webber's follow up to her 2013 release "Percussive Mechanics (Pirouet 2013) finds her exploring the expressive capabilities of a trio setting. While the compositional sensibilities introduced in her first album remain, her affinity for polyrhythms being a good example, the new texture provides her the ability to play with more freedom and subtle intricacy alongside her tight arrangements. Of course, her phenomenal bandmates contribute a lot in this respect.

Joining Webber on this outing are pianist Matt Mitchell, known as an in-demand sideman who has played with such luminaries as Dave Douglas and Dan Weiss, and renowned drummer John Hollenbeck, her teacher from her time at the Jazz Institut Berlin. Both collaborators are excellent musicians in their own right and their duo playing is a joy to listen to in itself. Add Webber's inimitable inventiveness and sense of melody and time to the mix and the result is something uniquely special.

The music for the album was written on Bowen Island in British Columbia, where Webber enjoyed the opportunity to isolate herself from the busy bustle of her home in Brooklyn and allow the music to develop organically. The peaceful seclusion is evident in many of the tracks, "Washington" being a beautiful instance of what such opportunities can lead to. The beautiful colors and textures were inspired by the far off mountains of Washington state; anyone familiar with the pacific northwest can hear the picturesque landscape being evoked. Likewise "1994" suggests a calm solitude with its subdued tempo and energy and its, at times, intense use of space. The alternation of dense and open voicings in the piano accompaniment suggest the beautiful struggle of removing oneself from contemporary life, as does Webber's sometimes lyrical, sometimes dissonant melodies.

Conversely, Webber's distinctively percussive and rhythmic compositional and playing style are very much evident throughout the album. A highlight among these compositions is "I Don't Want To Be Happy." With a driving, complex rhythm at the outset leading into a much freer section with wonderful interplay, this song is less obviously connected to the quietude of an island in the pacific ocean. Yet the reality of living with oneself, and only oneself, is not always as charming as a quaint island overlooking a beautiful ocean view. "Simplify, Simplify" is far from simple; the incessant rhythm suggests the ever present struggle of being honest with oneself in such a situation. Aside from these philosophical considerations, these songs groove and have compelling melodies, rhythms and forms.

Fans of avant-garde jazz, small group interplay and unique and driving compositions will all find something to love on this record. The group featured on the album will be performing at ShapeShifter Lab in Brooklyn, NY on Thursday, September 25.